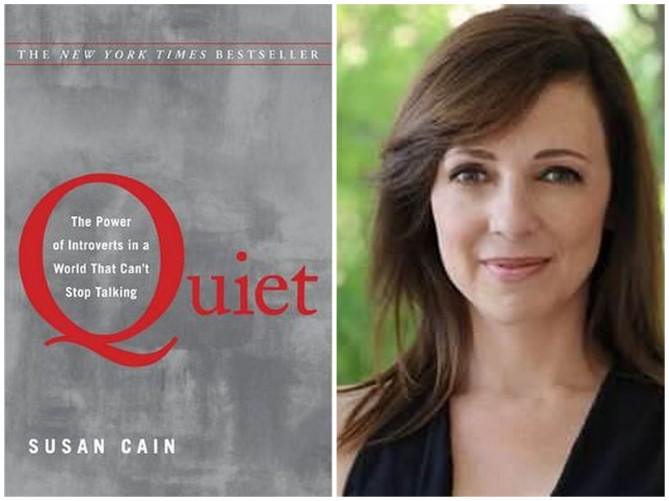 In 2012, Susan Cain, author of the best-selling and much lauded Quiet (subtitle: The Power Of Introverts In a World That Can’t Stop Talking), took what we thought we knew about introversion, and turned it on its head. She disabused us of any notion that introverts are shy (in fact, introversion and shyness are not particularly correlated, though a person could be both introverted and shy). She awakened us to deeper, more nuanced truths — about what extroversion and introversion really are, about why we need both to make the world go round, about why we err when we presume that the person that speaks the loudest is the one with the best idea.

Introverts, as it turns out, may be perfectly sociable sorts. They may enjoy parties and thrive in business meetings, but when they’ve had their fill (which happens quicker for them than for they’re extroverted peers), they’d just as soon go home and curl up with a book. Introverts will not shut your party down. They will not dance atop your table. They will not talk incessantly. They will listen more, and they’ll listen more deeply.

Introverts go deep, often eschewing small talk in favor of deeper, more connected conversation. They’re more deliberate in their approach, more measured, more likely to think things through and seek out the right answer rather than the one that’s closest at hand. For all these reasons and more, they often have the best, most original, most innovative ideas. Stephen Wozniak, “the nerd soul of Apple,” was an introvert who socialized with other engineers, but created the first Apple computer alone. Einstein was an introvert. Rosa Parks was an introvert. Warren Buffet is an introvert. On the other hand, Steve Jobs and Martin Luther King, Jr., Wozniak and Parks’ counterparts, respectively, were both extroverts. Hard to imagine Apple or the Civil Rights Movement without both personality types.

We tend not to listen to introverts, because they’re not talking loud and selling hard, their chests all puffed-out with false bravado. Instead, you may find them sitting in solitude (a state their extroverted counterparts cannot so easily abide), letting ideas that can only be born in silence come forth.

If we’re looking for the best ideas, we’d be wise to listen to introverts at least as often as anyone else. Introverts are thoughtful. They’re more likely to think things through and less prone to rash judgment and the kind of fly by the seat of your pants decision-making that can sink the global economy, or drive us into senseless war.

In Quiet, Cain tells of a class assignment at the Harvard Business School (HBS) (which one of Cain’s friends, himself an HBS graduate, called the “Spiritual Capital of Extroversion” — a sentiment that was echoed by HBS students who told Cain, “Good luck finding an introvert around here,” and “This school is predicated on extroversion.” It’s also predicated on certainty, the crown jewel of those who want to lead, even if that certainty is faked. Swagger and certainty, feigned or otherwise, are essential tools for those who wants to lead — at least in the world as it was constituted B.C., before Cain.

In a group project Cain writes about in Quiet, HBS students were asked to work together in groups to solve a problem. One group was lucky enough o have a classmate on their team who had extensive experience in the northern backwoods, which happened to have direct relevance to the problem they’d been assigned. This classmate was soft spoken. He was also right. No one listened to a word he had to say (or, rather, they listened, then dismissed him out of hand). Later, watching their process on video, the teammates were embarrassed. Their classmate was so clearly right, and he had persuasively argued his case. But charisma carried the day, blinding these smart, capable people to the truth that was right before their eyes.

Cain’s Quiet revolution calls us all to rethink the way we value human contribution. For many of us — roughly one-third of the human population, according to Cain’s rigorously researched book — it does something else as well. It ministers to our need to understand just how we are fitted to this world. A self-described “introverted extrovert”, I found, in Quiet, the answers I didn’t know I sought. Quiet gave the logic to my childhood penchant for reading books on the playground — this despite a strong athleticism that lent itself to hours in the gymnastics gym or romping through the woods with friends, activities that, not coincidentally, allowed me to be with others while also being alone. Quiet explained me to myself. She explained how I could crave solitude and also thrive in the public sphere.

If you’ve seen Cain’s TED Talk (and, if you haven’t, you should see it at once) you know that she brought the TED crowd to their feet, not with bluster and bravado, but by being her luminous, introverted self. She is proof positive of her own thesis: that we err when we assign the leadership reigns to the extroverted alone.

PHOTOGRAPHY AND IMAGE via The Power Of Introverts