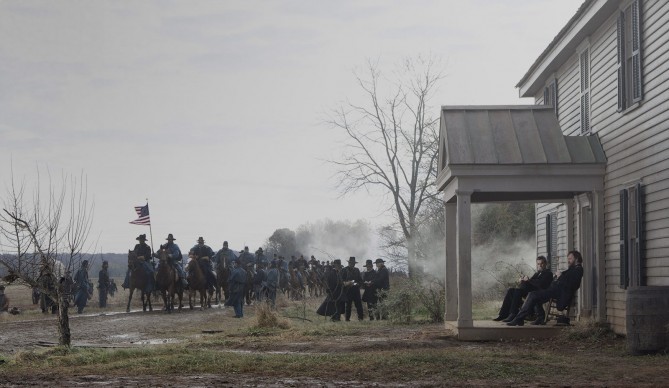 There is a moment in Lincoln. A quiet moment. Lincoln, played by Daniel Day-Lewis (who, as always, is playing at the very height of his powers) stands in a wide open room, talking to the young telegraph clerk. He asks him, “Do you think we choose to be born? Or are we fitted to the times we are born into?” It’s an interesting question. Do we sign up for the roles we play on the great human stage, or do we arrive here innocent of what we’ve been conscripted for?

Abraham Lincoln was born for the historical moment that comes to life so vividly in Steven Speilberg’s Lincoln. The film focuses on the final months of Lincoln’s life, the months during which he, and likeminded men and women, worked tirelessly, behind the scenes, and in the chambers of the House of Representatives, in their official capacities, and in their unofficial capacities as wives and helpmeets, to ensure the passage of the 13th Amendment to the United States Constitution, which would forever end the dark institution of American slavery.

Lincoln is a cerebral film punctuated by great moments of emotion. It rewards those who love history and political process, and calls those who do not to think deeply about the great forces that shaped a nation in its darkest hour. There are so many great moments in Lincoln, and too many great performances to name, but the one that stands out is Tommy Lee Jones as Thaddeus Stevens, who devoted his life to the idea that all men are equal, and did what was necessary to ensure that they were equal under the law. The moment when he hands the official copy of the ratified 13th Amendment to his free black housekeeper is one of the finest moments of the movie, rivaled only by the beautifully, incendiary moments between Lincoln and Sally Fields’ Mary Todd Lincoln in which her unsung role as the heart and backbone of a great man are laid bare.

Lincoln is in select theaters now. It opens wide on Friday, November 16. For an in depth look at Lincoln the movie and the historical Lincoln visit the Official Lincoln Movie Website.

PHOTOGRAPHY via The Walt Disney Company