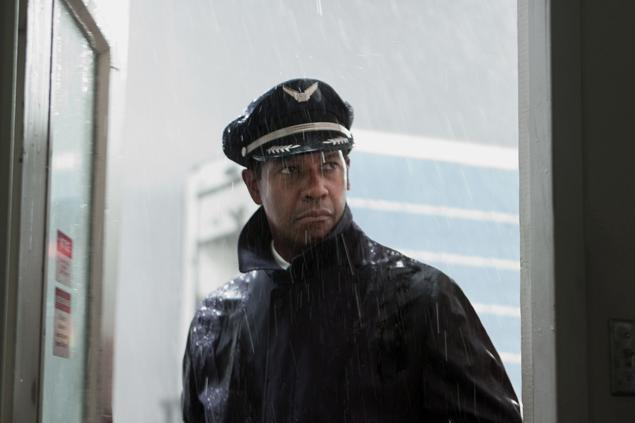 In Flight, Denzel Washington, that towering figure of the cinema, plays Whip Whitaker, a man brought low by an odd and compelling cocktail of professional prowess and personal weakness. He’s the great-man-with-feet-of-clay made flesh. For men like Bill Clinton, Martin Luther King and JFK, the clay feet was a weakness for the ladies. For Whip, it’s a weakness for booze and cocaine, the former to bring him down to that sweet numbness that even the well-adjusted among us sometimes crave, the latter to bring him back up so he can walk through life masquerading as someone worthy of the public’s trust — which, oddly enough, he might even be. Even impaired, Whitaker flies a plane like nobody’s business and handle himself in a hearing in which he’ll fight for his freedom and, metaphorically, his life. In fact, it’s the film’s brilliant juxtaposition of Whitaker’s unmatched talent with a plane (he flies upside down then glides to a landing that saves 96 lives, a feat zero other pilots could replicate in simulation) with his breathtaking weakness for the bottle that makes Whitaker a hero we can root for — and feel compassion for — as he takes his own personal nose dive, and weighs whether to parachute out into a brand new life.

One of the great unanswered questions of Flight is whether Whip could have landed that plane had he not been drenched in booze and cocaine. Margaret, the flight attendant played with a sure and steady moral compass by the always excellent Tamara Tunie, tells us that drenched is how Whip always flies — at least for the 12 years she’s known him — and in all that time, his performance has seemingly been fine. Even now, when a plane has fallen from the sky, it turns out an act of God, and not an act of Whip, was to blame. Which begs the question (issues of health and well-being aside), whether some people aren’t better off drunk. Of course, I don’t really mean it — I’ve seen the ravages addiction up close — but Flight excels in turning conventional wisdom about addiction on its ear, which, to my mind makes, it a fine feat of storytelling indeed.

That we don’t know what drives Whip to drink and drug is another move that deepens the enterprise. Writer John Gatins and director Robert Zemeckis [Castaway, Back To The Future] make Whip himself the voice of addiction-narrative skepticism. Whip rejects his new girlfriend Nicole’s tidy story of being driven to drugs by her mother’s death from Cancer. And maybe he knows from whence he speaks. As far as we can tell, Whip had a fine — maybe even a charmed — childhood, and a wife and son who loved him, not to mention a career he loves and excels at. With the excuses stripped away, what Flight leaves us with is a man who just fell short.

Flight reaches its apex when Whip faces a biblical choice — between a lie and the truth, between his own darkness, and the path that may lead to the light. In the film’s final moments, long after this choice has been made, someone asks Whip, “Who are you?” His answer puts a perfect, untidy cap on a mighty fine film.

Flight is in theaters now.