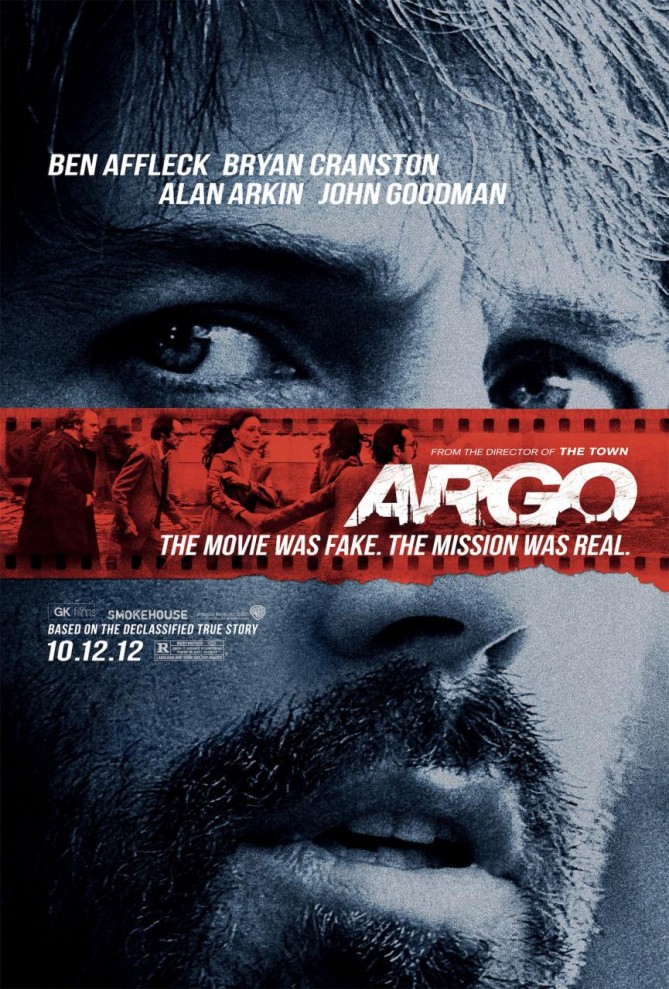 There’s a moment in the opening scene of Argo when I realized, “this isn’t your typical movie.” Argo is clever and funny and filled with the kind of tension-filled moments that make the thriller genre go round. But it’s more than that. Argo is entertainment of the highest order. It’s an oasis of greatness in the desert of mediocre event pictures that now litter the cinematic landscape. Set during the Iranian Hostage Crisis of 1979, it tells the story of Tony Mendez, a CIA operative who put together a fake movie (complete with a real script, real production offices, real Hollywood producer, and real write-ups in the entertainment trades) as cover for the operation by which he would ferry to safety six Americans who escaped the U.S. embassy in Tehran while the hostage-taking was getting under way. The six were holed up at the Canadian Ambassador’s house, but the clock was ticking. While Mendez maneuvered his way into, around and out of Iran, at the U.S. embassy, sweatshop workers, many of them children, were piecing-together strips of paper from the embassy shredder that would eventually reveal the photographic identities of the six escaped embassy workers. We know how Argo will end. The six will make it back home. But the film does such a fine job of putting us in their moccasins that we experience the emotional roller coaster ride as if we’re there with them, living out the life and death stakes.

Argo stars, and was directed by, Ben Affleck who, I’ll go on the record as saying, is one of the finest directors of his generation (he followed-up his startlingly accomplished feature debut, Gone Baby Gone, with the equally masterful The Town, and now this).  Affleck also produced, along with George Clooney and Grant Heslov under the banner of Clooney and Heslov’s Smokehouse Pictures, one of the few outfits that can still get important movies made in Hollywood. Argo wagers everything on the notion that a movie can matter and still be wildly entertaining. The film bristles with humor. Alan Arkin and John Goodman are the chief culprits, but Tate Donovan brings a spot-on physical and emotive humor to his part-within-a-part as director of Mendez’s fake film that ramps up the tension while letting just enough of the air out. Clea Duvall and Scott McNairy bring a poignant humor and fragile vulnerability to their roles as would-be escapees that emotionally anchors the film. I can still see Duvall’s Cora Lijek, peering out from behind her glasses like the terrified deer in the headlights that she was. And who could forget McNairy’s Joe Stafford, who careens from cowardice in the face of the mortal danger they’re so clearly courting, to courage and ingenuity when that danger looms most close.

Argo opens with a series of comic book-style storyboards (they’ll have narrative resonance later on), and a woman’s voice narrating the historical backstory that sets the stage for the film, the overthrow of Mohammad Mosaddegh, the Prime Minister of Iran, in a coup backed by the CIA and Brittain’s intelligence agency, MI5; the replacement of Mosaddegh’s replacement with Mohammad Reza Pahlavi, a.k.a. The Shah of Iran; the political and economic repression of the people suffered under the Shah; and his ouster during the Iranian Revolution of 1979, which brought the exiled cleric, the Ayatollah Khomeini, to power, and ushered in a new era of suffering for the people of Iran.

The Iranian Hostage Crisis grew out of the Iranian Revolution, but it also solidified what the revolution would become. What began as a diverse opposition movement that included secularists, constitutionalist liberals, Marxists, Islamic socialists and Islamic militants became, as the hostage crisis wore on, an Islamic revolution that would stamp out or suppress the other voices that had once been a vital part of the Iranian conversation.

Argo narrows its focus from the larger hostage crisis and the complexities it entails to Mendez and the six he rescued, a focus that allows us to feel the human dimensions of a crisis that is often spoken of in geopolitical terms. Argo’s great accomplishment is it’s ability to make everyone human — from the six hiding out at the Ambassador’s house; to the angry and bereft father who accosts them in the market having lost a son under the reign of the U.S. backed Shah; to the Canadian Ambassador’s maid, who will either help them or aid in their demise; to the Revolutionary Guard hardliners at the airport who also have a boyish side. Every one of these people is a fully drawn human being who’s loyalties cannot be reduced to a simple calculus of us and them. Instead, in all of their frailty and complexity and confusion and pain, they cause us to see the common humanity we share with people everywhere, whether their governments are our enemies or our friends.

Early on in Argo, as the protestors are raising a ruckus outside the embassy they’ll soon seize, Affleck the director, and his screenwriter Chris Terrio,  make a pivotal choice. They place us inside the embassy with the Iranians who have come to get visas to the United States. We feel the fear rising in them as their country men breach the gate and then the building where they thought they’d be safe. And, in that moment, the artificial boundary that separate us from those we think are not us collapsed. The frightened visa-seeking Iranians and their equally frightened U.S. embassy worker counterparts were just human beings united by their desire to be safe.

Argo is in theatres now.