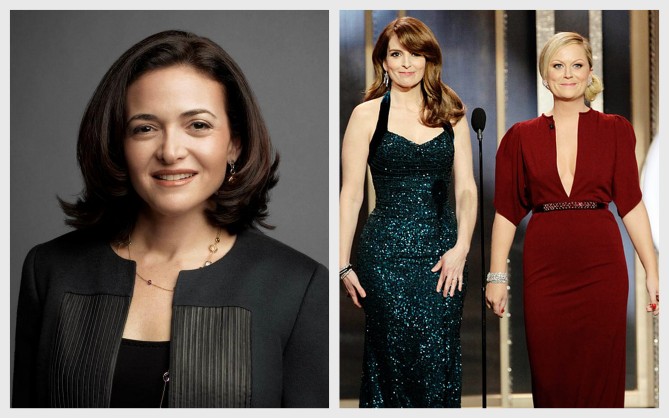 It’s been a weird week or two in feminist history. First Sheryl Sandberg gets (forgive the anti-feminist language, but it seems apt) bitch-slapped in the media for daring to speak feminism from accomplished heights, then Taylor Swift calls out Tina Fey and Amy Poehler, feminists if I’ve ever seen one, for supposedly not helping other women by honoring Swift with a joke at the Golden Globes. Of course, Swift came off like a petulant child, and Fey and Poehler handled her hurt feelings such good-humored grace that no real harm was done. Unfortunately, the attacks on Sandberg may leave a more lasting mark.

Sandberg, for those who missed it, has been lambasted in recent weeks by journalists who didn’t bother to read her book before they let invectives fly. Anna Holmes’ excellent New Yorker piece, “Maybe You Should Read The Book,” provides an account of the goings on. The attacks on Sandberg have come from men and women alike — including a few whom I’m pretty sure are feminists themselves. I haven’t read Sandberg’s book. When I do, I may find things to disagree with. But Sandberg’s central premise, described by Gloria Steinham on Charlie Rose as a two-pronged thesis about the need for both larger societal change (including the need for fathers and mothers to take as much responsibility for parenting as mothers do) and the need for women to adopt new ways of being that Sandberg argues are more conducive to success, at least in our world as presently constructed.

The Sandberg backlash has an anti-feminist stink about it. She’s been criticized for her privilege and for failing to speak to the realities of “all” women, as if any man on Earth has ever been lambasted for his privilege or compelled to speak on behalf of “all” men.

“Tellingly,” as Holmes writes in her New Yorker piece, “many of the most full-throated defenses of Sandberg came from women who had actually met her. Last autumn, Sandberg’s P.R. team invited a group of about twenty writers—including this one—to a dinner at Estancia 460, a restaurant in lower Manhattan. The evening started with cocktails, then proceeded to a dinner at the back of the restaurant, where guests sat at tables arranged in a square. I ended up seated directly next to Sandberg, where, in the course of three intense hours, I was able to observe her interactions with the rest of the group. I found her extremely impressive: smart, curious, sincere, funny, and warm. It was clear that she’d done her homework on every single woman in attendance, and she was frighteningly well-informed about the structural issues and challenges that working women are up against. (The evening’s conversations were off the record, so I can’t comment on specifics.) To say that I left that dinner feeling simultaneously inspired and sheepish would be an understatement.”

Holmes’ impressions, based on an actual encounter with the actual Sandberg, will forever carry more weight in my book than the impressions of a thousand journalists who haven’t even bothered to read the book.

Sheryl Sandberg’s book Lean In: Women, Work, And The Will To Lead is No. 1 on Amazon’s Best Seller’s list.

PHOTOGRAPHY (left to right) via GraceHopper.Org and BY PAUL DRINKWATER/NBC UNIVERSAL via UsMagazine.com