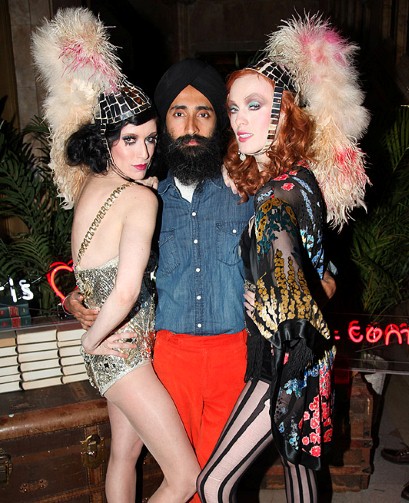 Waris Ahluwalia has followed the rhythms of his own peripatetic life, and landed on the shores of some enchanted land, where you can do anything you fancy, and all of it seemingly well.  All of Ahluwalia’s wandering and exploration have turned him into a sort of “renaissance adventurer,” one who, on the one hand, makes glorious, luxurious, bohemian jewels and, on the other, stars in movies both big and small (from The Life Aquatic With Steve Zissou and The Darjeeling Limited to The Inside Man). He collaborates thither and yon with this one and that one (like the panty line he did for Yoox.com or diamond collaboration he did with Forevermark), gets profiled in the grooviest online places (mrporter.com, theselby.com, thesartorialist.com and the list goes on), and shows up at so many creative happenings that you can get a creative royalty contact high just from perusing the photos of his gallivanting about. 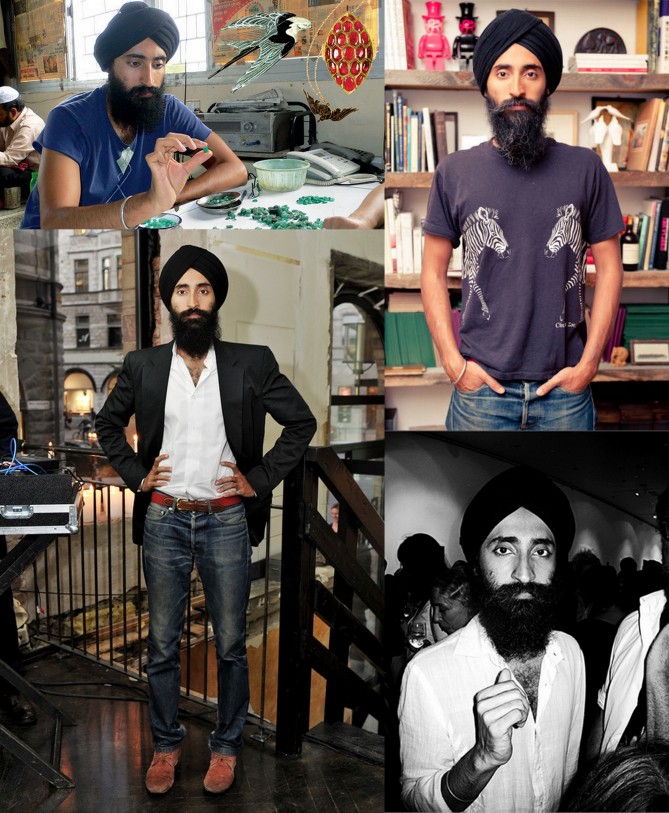 Ahluwalia is an unlikely creative (and proof, if any is needed, that we are born as who we are). He comes from a family of academics. Born in Amritsar, India and raised in New York from the age of four, Ahluwalia wasn’t exposed to the arts as a child. Nurture cannot explain what he has become. But somewhere in his late teens, the stamp on his soul made itself known. He was drawn to creativity and, by his late 20’s, he was ready to make the leap, headlong, into the creative life. And what wonders he creates.

Ahluwalia is the owner and designer of House of Waris, the aforementioned jewelry line and 2009 CFDA/Vogue Fashion Fund nominee. Like so much in his magical, dream vision of a life, House of Waris happened by happy accident. While shopping in the L.A.’s cutting edge boutique, Maxfield, the store’s buyer admired Ahluwalia’s rings — one-offs he’d designed for himself — and placed an order on the spot. 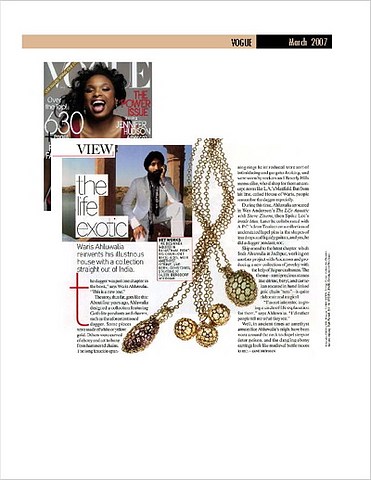 This pattern of things popping up, seemingly out of nowhere, has been a theme in Ahluwalia’s life. He met the film auteur Wes Anderson, maker of such films as Moonrise Kingdom, The Royal Tennenbaums (as well as The Life Aquatic and The Darjeeling Limited, in which Ahluwalia appeared) at a peace rally. Says Anderson, ‘Waris had a smile that caught [me] a little off guard.” The two immediately forged a bond and Anderson offered Ahluwalia a supporting role in The Life Aquatic. Without so much as an audition, Ahluwalia was in company with veteran actor Bill Murray, hot property Owen Wilson, Academy Award winner Cate Blanchett and the gifted, journeyman character actor cum movie star Willem Dafoe.

In an interview with Fast Company back in 2010, Ahluwalia said, I always knew I would do tea.” His opportunity came — like so much else in his life — when someone approached him, in this case the nonprofit arts organization BOFFO, who was then inviting designers to play with a vacant lot turned pop-up shop underneath the Manhattan High Line, the rail line turned elevated park that bridges Manhattan’s Meatpacking district and the Chelsea neighborhood to the north before descending back to earth at the southernmost tip of Hell’s Kitchen. BOFFO paired Ahluwalia with the Swiss architect Christian Wassmann, who helped him transform the former vacant lot into a wonderland of Waris’ creation. There was a reflecting pool, which Ahluwalia likes to think of as a mote. The space was swathed in huge expanses of raw canvas. Vogue described the tea room as having “the secluded charm of an explorer’s cabana,” with “playlists from the likes of [artist] Albert Hammond, Jr., [stylist] Camille Bidault-Waddington, and A.P.C.’s [founder] Jean Touitou set[ting] the mood,” along with a grouping of Ahluwalia-curated Criterion love stories.

Ahluwalia, who hosted a book launch party at the tea house for the artist Eric Anderson (brother of the filmmaker Wes), said, “I want to create an experience. I like the pause that tea allows. I primarily live in New York City, a place that is about constants, not letting up and not stopping. So with the tea room, we’ve created an oasis… When you’re here, you’re not a customer–you’re a guest.” He continued, “[I]t’s not about products or business.” It’s about inspiration.

The idea behind Ahluwalia’s tea room caught my fancy because it’s just the kind of universe I would imagine he would recreate. Had I been living in New York at the time, I would have high-tailed it over there for a little tea and creative sympathy. Speaking of the tea room, Ahluwalia said, “My inspiration for everything is love and history,” a truism made clear by his book, To India, With Love, an homage to his homeland that takes a scrapbook approach, collecting the personal photos, stories, and memories of India lovers like Wes Anderson, Adrien Brody, Francesco Clemente,  Natalie Portman, James Ivory, Matthew Williamson, Cynthia Rowley, and Tory Burch. It was a creation inspired by the 2008 attacks in Mumbai.

Love and history have served Ahluwalia well. As he said in an interview with luxpresso.com, “jewellery desigining is not a path I chose. I always say jewellery found me.” Ahluwalia continued with a quote for the ages, “The universe speaks to us all—we just have to learn to listen.” In birthing his jewelry collections, Ahluwalia has searched the world over for the best craftsman. He found his first workshop in Rome, and continued his journey on to India, where he had what he describes as a “magical” experience, unearthing a family that’s worked in jewelry for centuries. He found “the most delicate setters” in Bangkok and then somehow found his way home to the hand engravers he works with in New York.. About his work, Ahluwalia said, in an interview with luxpresso.com, “I work with gold that holds history, diamonds that see the future and rubies that long for love. There’s a story in each stone.” To Vogue Italia, he explained that what makes jewelry beautiful to him is the breath of history on an object. “It’s jewelry and pottery that archeologists find on their digs. It’s working in forever that I like — working with objects of beauty that become an intimate part of someone’s life.”

In his 2011 interview with Vogue Italia, Ahluwalia said of himself, “I’m an explorer.” It’s evident in the way he moves through the world, making this and inhabiting that, like a snake who perpetually slides into and out of new skin.

P.S. How much do we love the turban? Ahluwalia is a Sikh who takes the turban off to (his words) “sleep, shower and sex.” Oh well, guess we can’t be there for that.

5 THINGS I LEARNED AT THE CHURCH OF AHLUWALIA

One: Everything is possible, so choose everything again and again.

Two: Let them come to you.

PHOTOGRAPHY (top) via The Telegraph, (middle, clockwise from top left) via Pursuitist, via Vogue Italia, via Stureplan, (bottom) via Vogue