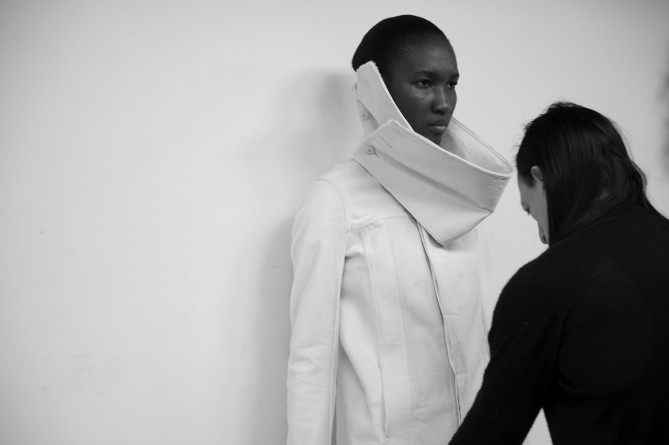 It’s in this context that I consider the images above, which appeared in two different spreads in Roitfeld’s CR. The first, of New York Giants wide receiver Ramses Barden and New York City Ballet dancer Faye Arthur is soaked in the history and iconography of black masculinity and white femininity as it plays itself out in the White American consciousness and, by extension, in the Black American consciousness as well. This image contains the image of Emmett Till, the 14 year old African-American child who was lynched in 1955 Mississippi for looking at a white woman. And it turns it on its head, rendering the strong, black, male body what it has always been, an object of beauty, intentionality and grace. The second image, of designer Rick Owens dressing a model before his show, stands in stark opposition to the history and iconography of black female body as property and object of sexual degradation. Swathed in Owens’ armor-like coat, she is invincible, possessed by no one but herself.

So much hatred has been projected onto the black body that these images act as an incantation, undoing psychic harm. History cannot be unwritten, in the end, and scars cannot be undone, but old messages can be overwritten with new ones, which is what these images have done.

Of course, Roitfeld is not American, she may have had none of this in mind. But the magic of making art is that sometimes pieces of history, memory and grace move through us…, without our knowledge or our consent.

We would love for you to join the conversation. Please leave a comment and share your thoughts.