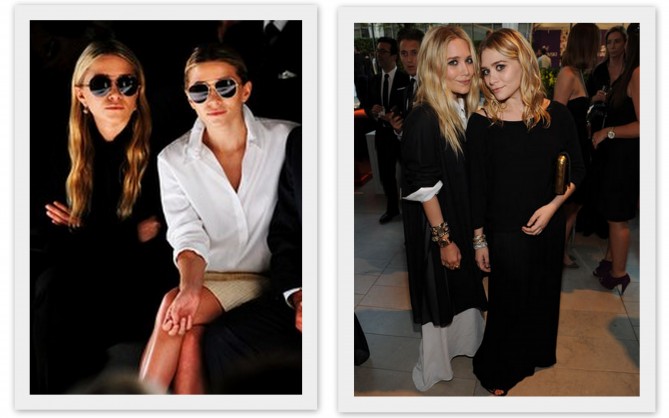 Queens of Re-Invention. That’s what they are. The Olsen twins may have had advantages the rest of us did not — they had money and connections almost from the start, which must have come in handy when they decided to make the luxury tee that would launch a brand — but they didn’t build their business by skating by on their wealth and celebrity. They built it the old-fashioned way, by filling a need — for the perfect t-shirt, for luxury basics with elevated design — and doing it better than just about anyone else.

These are hard working women these, with the clarity of vision to cast down their nets where they are, and pull in a mighty load. Mary Kate Olsen and Ashley Olsen launched The Row in 2006. Six years later, in 2012, the Council of Fashion Designers of America (CFDA), the influential fashion industry trade association, crowned The Row 2012 Womenswear Designers of the Year.

When The Olsens launched The Row, they were 20, and old beyond their years. At 24, they noted without apparent irony that they were really 48 — and like any self-respecting 48 year old would, they just got on with it. They built life anew on their own terms and didn’t look back. The results have been breathtaking. The clothes — the tailoring, the sense of proportion, the simplicity, the impeccability — are so very fine that it’s hard to believe that this all began with a t-shirt. They followed that t-shirt up with a tank, a dress, a blazer, and a pair of black stretch leggings that appeared on the cover of Forbes magazine, in 2007, on none other than Lauren Hutton, who, at 63, would become the face of the brand, a stroke of brand positioning genius that was all the more effective for being authentic and true to who these young-old women are. They and their creations are timeless, ageless, all the things that Hutton represents, and has done for going on four decades.

These days, luxury tees abound, but The Row still stands apart. They set the tone for a kind of simplicity of dress that, rather than suggesting austerity, suggests a sense of grandeur. Of course you’ll pay for that grandeur — The Row’s price tags are north of anything resembling normal — but you’ll see their influence in the offerings on offer at perennially affordable Zara, and on the backs of leading tastemakers of recent years.

Did the Olsens intend such a cultural impact when they set out to make that first tee? Who can say for sure? But from the beginning, the Olsens have shown a remarkable clarity about what they are up to, and where it fits in the world. They shrugged off the celebrity designer mantle like they were shrugging off an old dead skin — and arguably they were, having launched and left behind one of the earliest celebrity fashion brands, created in partnership with Walmart when they were teens.

I admire people who make their own, original way through this world. They are my master in how this “being who you are in the world” business works. What are the lessons the Olsens teach? To do the simple, manageable thing that’s right in front of you. To put in the hard work and do the strategic thinking and keep pushing the envelope until that seed of a vision you first had becomes a fully mature tree.

In Interview Magazine, Mary Kate Olsen said that the t-shirt started with “us talking with our friends… just putting it on bodies,… anyone from 12 to 60.” Ashley continued, “we wanted it to be different sizes; we wanted it to be timeless.” From their they set about “learning about production and manufacturing, one piece at a time.” And that, I suppose, is how anything’s done. One piece at a time.

THREE GAME-CHANGING THINGS THE ROW HAS DONE SO FAR:

Made Age Irrelevant. The Row is for women 18 to 80 and beyond.

Collaborated, Making More Than The Sum Of The Parts. In their collaboration with TOMS, The Row put a luxury-brand twist on the grass-roots, buy-one-give-one ethos that TOMS represents. More than 13,000 pairs of Toms + The Row’s cashmere slip-ons have been sold. The Row has also collaborated with sneaker-maker Superga on a cashmere trainer that I’d love to add to my own dream “luxury basics” wardrobe.

Changed The Handbag Game. It’s hard to believe that anyone would make a $39,000 alligator backpack, but the Olsens did, as part of The Row’s first foray into handbag design, and, wait for it, it sold out. Which just goes to show you, Virginia, you have to think big.