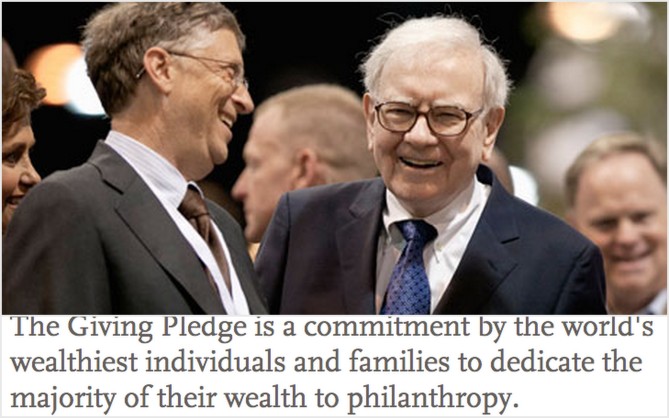 The Giving Pledge is an idea you can believe in. It’s the brainchild of Warren Buffett and Bill Gates, and represents what we believe is the pinnacle of capitalism, the end and purpose of which is the improvement of human life.

We are capitalists. We believe that capitalism is well-suited to the production of wealth and that wealth is an indispensable tool for improving human life.

In their bestselling book Sex At Dawn, Christopher Ryan and Cacilda Jethá tell us that our hunter gatherer ancestors were much better sharers than we are. Sharing wasn’t just encouraged, it was mandatory. Hoarding or hiding food was considered deeply shameful and nearly unforgivable. They weren’t more evolved than we are; they just understood that their mutual survival depended on everyone’s adherence to this code. Sharing was simply the best way to distribute the inherent risks of life so that everyone would have a chance to survive.

Sharing is still the most practical approach for organizing human society. Intuitively we already know this, which is why when there’s a natural disaster or a terrorist attack — event for which we hold people blameless — we tend to redistribute our own resources so that other people can survive. END_OF_DOCUMENT_TOKEN_TO_BE_REPLACED