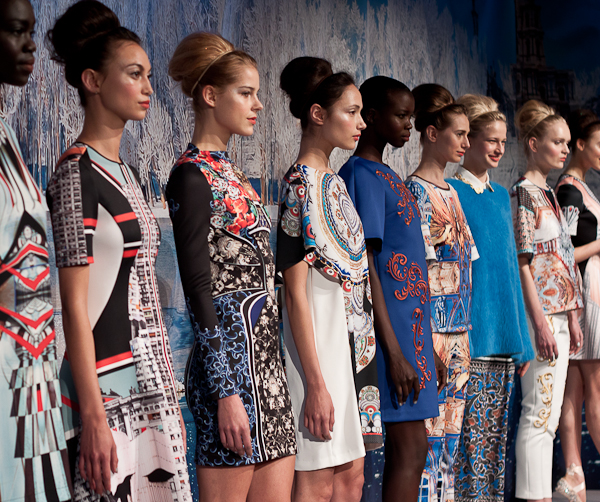 California keeps turning ‘em out. Great fashion designers, I mean. Our latest find — Clover Canyon — is not to be missed. They join a growing pantheon of truly great California designers that include the Rodarte girls, Libertine, Jenni Kayne,  20112 CFDA/Vogue Fashion Fund winner The Elder Statesman, designed by Greg Chait, 2012 CFDA/Vogue Fashion Fund nominee Andrea Liebermann, who was nominated for her line A.L.C., and the list goes on and on and on. There are literally so many great fashion designers coming out of Los Angeles these days that, while I can see their designs swimming in my head, I can’t call them all up by name (though, perhaps there’s a California fashion designers post in my future). Today, though, we are singing the praises of Clover Canyon, who I literally didn’t know about when I woke up Wednesday morning. Now they are top of mind. I love their use of color, their use of structure and pre-ocuppation with great design, and the easy California spirit they infuse in all their designs. I could literally imagine throwing on one of their dresses with a pair of flat sandals by relaxed, California day, and swapping them out for a high-heeled sandal or pointy-toe pump for dinner with my hubby on the town. Clothes like these, which carry you effortlessly from day into night, are just what we all need for our busy and fully realized lives. And as for The Fully Realized Life, the folks at Clover Canyon seem to be living it, as evidenced by their own sense of what they’re doing, which I’ll give you, now, in their words:  END_OF_DOCUMENT_TOKEN_TO_BE_REPLACED

END_OF_DOCUMENT_TOKEN_TO_BE_REPLACED 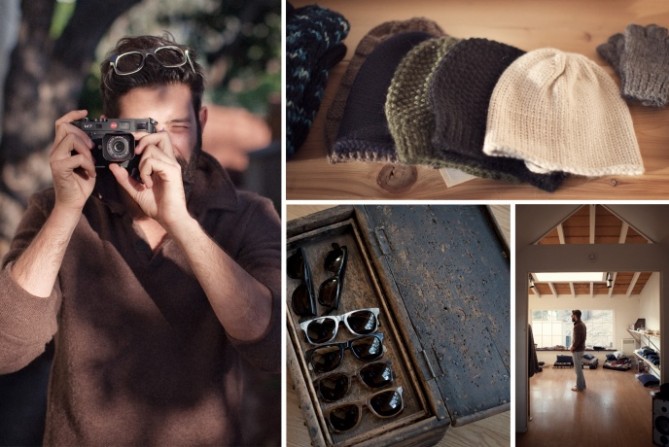 Last night, the CFDA/Vogue Fashion Fund crown went to Greg Chait’s The Elder Statesman. A wonderful article about the brand appeared in Vogue last November. Read the don’t miss article (and see the don’t miss pictures) here. What I love about The Elder Statesman is how it seems to have evolved organically (and continues to evolve organically) out of who Greg is and what interests him. It’s a lifestyle brand rather than “merely” a clothing brand. To give you a sense of what I mean, I leave you with this quote from the November 2011 Vogue piece, which I think says it all: END_OF_DOCUMENT_TOKEN_TO_BE_REPLACED

END_OF_DOCUMENT_TOKEN_TO_BE_REPLACED

British fashion designer Matthew Williamson is the king of color, and sultan of an exuberant, bohemian-inflected glamour of his own invention, that is now such an essential part of the modern style lexicon that we imagine it was always thus.

I’ve long been a fan of Williamson’s designs and enamored of his Indian swami looks — which must have rubbed off whilst the Englishman was traveling through. They suit him in every way for the magic kaleidoscope life he leads. It is a singular life, and a Technicolor example of what it looks like when all the pieces of you line up.

Williamson, who once said, “My design philosophy is to make women feel like peacocks,” found his visual native tongue in his travels to India and Bali. Those influences are still evident in his work, which drips with vibrant color, pattern and embellishment. Williamson knows how to work a frock. Slip one on and you are transported, back to the dress-up box, and the fairytale magic that found you there. END_OF_DOCUMENT_TOKEN_TO_BE_REPLACED

END_OF_DOCUMENT_TOKEN_TO_BE_REPLACED

The life of Florence, Alabama-based womenswear and menswear designer Billy Reid is so insanely beautiful, authentic and inspired it’ll have you wanting to decamp to some sleepy town in the Deep South…if only to prove that it isn’t so sleepy after all. Florence Alabama alone, which the New York Times dubbed the fashion capital of the deep South (never mind that moniker only shows up in the Google search, and never in the article itself). Florence alone is home to Billy Reid and filmmaker turned designer Natalie Chanin’s Project Alabama, (since re-dubbed Alabama Chanin), the fashion house that found its place in the fashion firmament by combining high fashion with a community revitalization project that employs local women ages 20 to 70, former factory workers, retired teachers, widows, stay-at-home moms, and secretaries who help sew Alabama Chanin’s one-of-a-kind, handmade garments. Alabama Music Hall of Fame is just down the highway, and if you stop on in, you’ll learn a thing or two about Alabama native son Hank Williams and the Muscle Shoals Rhythm Section, which influenced the sounds of Aretha Franklin and so many more. You’ll even find a Frank Lloyd Wright house right there in Florence, the only one of its kind open to the public in the deep South.

But I digress. There’s a whole world of riches in the Deep South — and just about any place if you look with an open mind. But this is about Billy Reid. Billy’s life is a living example of what a fully realized life can look like — and a reminder that sometimes our best life can only be accessed by riding the stormy waves that life sometimes brings until it carries us to some new shore. Billy rode his wave to Florence, Alabama, where he hosts his annual Shindig each year. One of these days, Billy Reid is going to invite me to his Shindig. Until then, I’ve got this video from Nowness.com, one of the most inspired destinations on the Web.

One. Because, when his business failed on the heels of an economy turned south, Reid and family packed up and moved his family to that deeper, sweeter South.

Two. Because Reid created a new reality — and invited us all along.

Three. Because, in rebuilding his business, Reid rose like a Phoenix from the ash.

Stella McCartney may have been the obvious choice to design Team Great Britain and Paralympics Great Britain’s  uniforms (or “kit”) for the 2012 London Olympics. After all, her Adidas by Stella McCartney line has more than proved her athletic-wear bona fides, but her ascendancy to the luxury-brand fashion throne was anything but “written in the stone”. McCartney’s come a long way from her childhood on the organic farm, where she was raised by a hippie-era rock star dad and photographer mum (dad is Paul McCartney, mum is the late photographer, musician and animal rights activist Linda McCartney) — and also no distance at all. The values that have driven her brand from the start — a decision to abstain from the use of leather and fur (at a time and in an industry where this could have sunk the ship before it sailed), a commitment to making clothing in an ever more sustainable way — were there at the start. END_OF_DOCUMENT_TOKEN_TO_BE_REPLACED