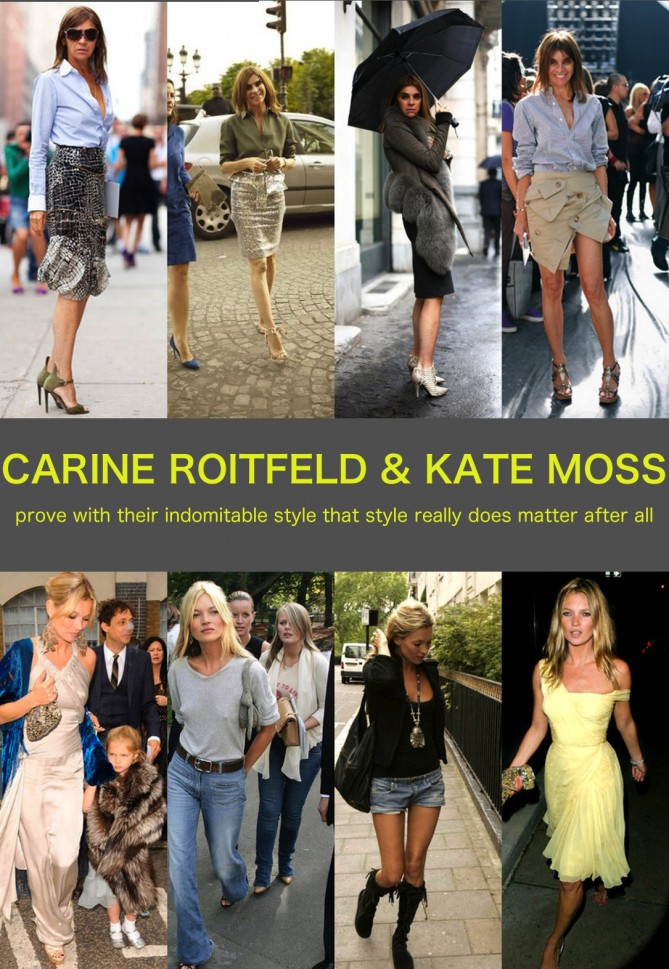 If I had a thousand lives to live, I would live one life with the rock-chick meets the boardroom style of Carine Roitfeld, and another with the toss-away luxe-boho style of Kate Moss. Or better yet, I’d find an indomitable style all my own, and wear it like a second layer of skin, just like them.

There’s something about a woman, or a man, in possession of a great and singular sense of style. A woman like Kate or Carine, whose essence very seeps from her pores, and into the clothing that must have been made just for her, because no one else could wear it half so well.

Kate and Carine are iconic women of fashion, but, with them, the fashion seems almost beside the point. Sure, it’s the canvas they live they’re lives upon, but a canvas, in the end, is but a backdrop. It’s what’s upon it that catches the eye.

To be fair, the designers whose clothing they so fetchingly wear do weave magic too, but in the alchemical brew that is Kate or Carine, something new springs forth that not a designer alive could dream up. In this sense, they are true collaborateurs, creating something previously unimagined, like the great film actors, who brings to life the unseen possibilities hidden on the page.

What do they know that the rest of us don’t? They know that clothes don’t make the woman; the woman makes the clothes. They know that originality counts — it may be the only thing that does — and that, lo’ though the daggers may fly, standing out as your original, one-of-a-kind self is worth a try.

Carine and Kate dress like they’ve pulled up riches from the depths of the sea of who they are. Always — always – they look like their singular selves. It’s what we all might do, if we had half their moxie, and a fraction of their will. It’s no mistake that they’re impossibly sexy, too, because, at the end of the day, there is nothing sexier than being who you, authentically, are. When your every gesture and flourish carries your own DNA, you can’t help but captivate and leave us longing, not just for you (or not only for you), but for own captivating, alluring selves.

What Kate and Carine know is that we are all somebody already when we drag ourselves into this world. Our job is simply to let her out.