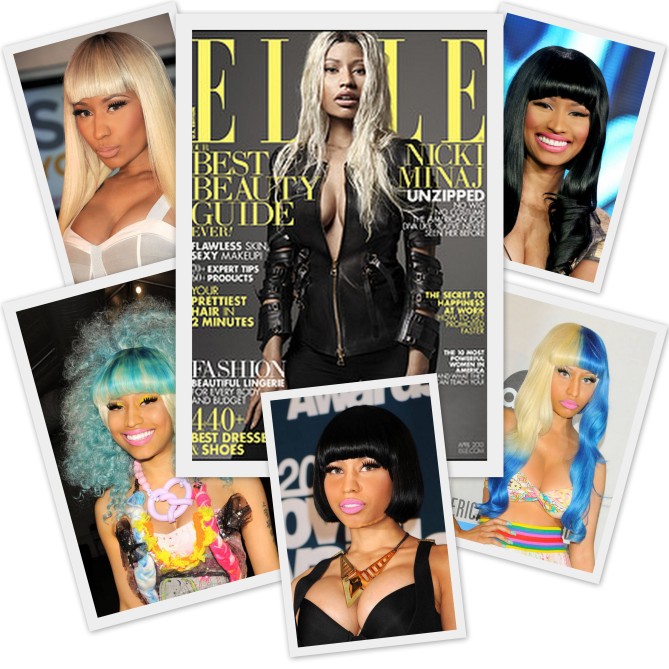 I wouldn’t know a Nicki Minaj song if you tied me down, played it on constant loop and told me you wouldn’t let me up until I named that tune. Nevertheless, I am a fan. Not of the music, which I suppose I should go listen to now, but of the freak flag flying soul who makes that music tick. Before this season’s American Idol, I knew almost nothing about Minaj aside from her penchant for wearing theatrical clothes. I didn’t get it really. Still, I have a special place reserved in my heart for all those who walk there own way, whatever the world may so. And so, o sound unseen, when she popped up on Idol, I resolved to give her a try, and what I found surprised.

As the weeks passed by, Nicki the act receded, and Nicki the woman stepped forth. That’s when I noticed how pretty she is, outside and in. What I love about Nicki, by far my favorite this year, is (1) the way she always speaks her mind even if what she’s saying kind of makes no sense (though, if you listen closely, she usually brings it home in the end) and (2) her heartfelt passion for the inhabitants of the Island of Misfit Toys. It’s a beautiful thing, this compulsion to make sure everyone knows they’re okay, exactly as they are. One of my favorite moments of the Idol season was when Minaj told a contestant who’d been blessed with extremely short height that it was time to retire the story of how short he was and how much all this hurt. She said something like (cue her signature wine, which I’ve secretly come to love), “Stop it. Because when you sing, we don’t see your height.”

She said it with such conviction that I, for one, believed every word and I hope that he did too because I’ve been him, I’ve felt like I didn’t belong. If you’ve ever walked that way, you may recognize his impulse to over-toot that horn. And if you’ve ever passed out the other side, you’ll also recognize the wisdom of Nicki’s words: just “stop it” (or whatever it is she actually said). Stop apologizing for yourself. Stop explaining how you’re “short” or “black yet well-spoken” or “gay” or have one leg. These are immutable things anyway, and none of these things are wrong. And then there’s the secret that Nicki knows. If you stop dwelling on your real or imagined flaw, if you stop naming it “oddity” or making it somehow wrong, we’ll stop dwelling on it too, and instead we’ll dwell on you. You who are perfect as you are. You who are perfect in the only way that any of us ever really are. Perfect like a rose, whose beauty we see despite its crooked petals and all those thorns.

A few years back, I read an article on the fashion designer and filmmaker Tom Ford in which the writer quoted a friend of Ford’s who said, “people take you at your own estimation,” something Ford innately understood. If this is so — and I do believe it is — then why not esteem yourself well?