Stella McCartney may have been the obvious choice to design Team Great Britain and Paralympics Great Britain’s  uniforms (or “kit”) for the 2012 London Olympics. After all, her Adidas by Stella McCartney line has more than proved her athletic-wear bona fides, but her ascendancy to the luxury-brand fashion throne was anything but “written in the stone”. McCartney’s come a long way from her childhood on the organic farm, where she was raised by a hippie-era rock star dad and photographer mum (dad is Paul McCartney, mum is the late photographer, musician and animal rights activist Linda McCartney) — and also no distance at all. The values that have driven her brand from the start — a decision to abstain from the use of leather and fur (at a time and in an industry where this could have sunk the ship before it sailed), a commitment to making clothing in an ever more sustainable way — were there at the start. 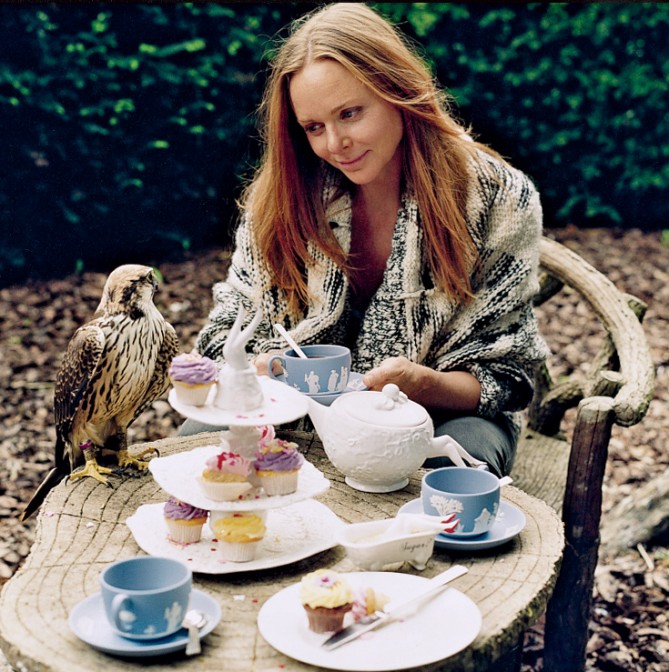 McCartney took the fashion world by storm straight out of Central Saint Martins, the famed London design school that plaid a hand in the careers of more design luminaries than I can imagine, among them the great Lee Alexander McQueen, Matthew Williamson and Hussein Chalayan. With her behemoth-level design vision and talent, and non-negotiable, cruelty-free/sustainable approach to delivering luxury goods. She may sacrifice a bit in profits along the way (sometimes doing the right thing does cost a little more), but isn’t that exactly what a modern brand should do — measure its profits not just in the money it makes, but in the positive impact it has the privilege of having on the world?

By making  impeccably tailored, imaginatively conceived, and ethically consistent luxury-brand fashion on her own terms, Stella has proven that we don’t have to dump our values at the door to make our way in this world.

Let’s take a look at some of Stella’s greatest hits.

Stella McCartney
McCartney launched her eponymous line right out of Central Saint Martins. After two collections, she took the reigns as Creative Director at Chloe, where she revitalized the storied brand for a new generation. In 2001, she re-launched the Stella McCartney label in a joint venture with the Gucci group (and now with the luxury arm of PPR, the company behind Gucci, Bottega Veneta, Yves Saint Laurent, Alexander McQueen and more).

Shoes and Handbags
A few years ago, I was at an art opening at a very groovy gallery on a grimy stretch of an iconic L.A. street. The food was great. The drinks were greater — my favorite, capirinhas, were served. But the star of the evening was the tote I glimpsed slung over another woman’s arm. She looked like an effortless million bucks — you know the kind of woman I mean, who looks both polished, and like she’s paid no care at all. Naturally, I asked the provenance of her bag in a sentence that went something like, “Can I ask where you got your bag.” “Stella McCartney” was her two-word answer, and in that instant I understood that you don’t have to sacrifice luxury to stake a claim on cruelty-free. To appreciate the scope and scale of McCartney’s accomplishment, you’ll need to see the bags in person — they don’t show as well on the computer screen — and when you do, you’ll find that she imbues her shoes and bags with the same sense of high-end style that she brings to her clothes.

PHOTOGRAPHY BY BRUCE WEBBER via Vogue.com