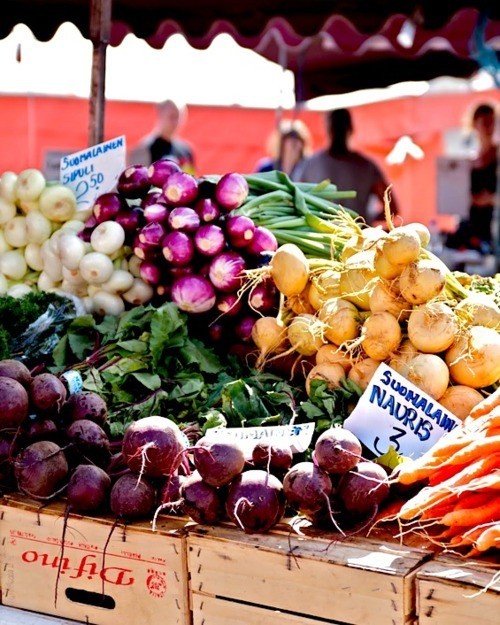 The first time I went to a Farmers Market I was in my early twenties and living in New York City. I would ride the subway down from my uptown apartment to the Union Square Greenmarket on 14th Street. There I learned to eat food in season. That’s when I learned how delicious food — the kind grown from the ground rather than purchased in the supermarket — really is. I had just become a vegetarian — and would remain such for the next 10 years until a craving for a pan-fried steak brought that little moment to an unceremonious end. With meat off the proverbial plate, I tried everything, from heirlooms tomatoes to vegetables I’d scarcely heard of. This was back in the days before fancy food was around every corner, so I fancied myself a food pioneer, wandering off to the wilderness of 14th Street to forage for goodies that someone had grown nearby with their actual hands. What I learned is this:

Food is best when you pick it ripe, something you can only do if you’re selling it soon or eating it soon somewhere close to home. If you crave flavor, locally grown food is the only thing that really makes sense. Eating locally is also good for the planet, which can do without the fossil fuels it takes to ship your food from very far. Farmers Market shopping is also good for the soul. It connects you with other people who care about food. The farmers are more than happy to tell you about what they do, and your fellow shopper just may share a recipe or tip for turning that vegetable you’re holding into something truly delish.

Here in California where the growing season is all year round, you’ll find me at The Hollywood Farmers Market on any given Sunday — Santa Monica is also very good — where the art of living in the seasons can still be learned. I’ve learned that lilacs bloom only in the spring, that Figs come out in July and that, if you want a Peach, July or August are your months.

Tell us about your Farmers Market and what’s in season now.

PHOTOGRAPHY via The Rue Magazine Blog