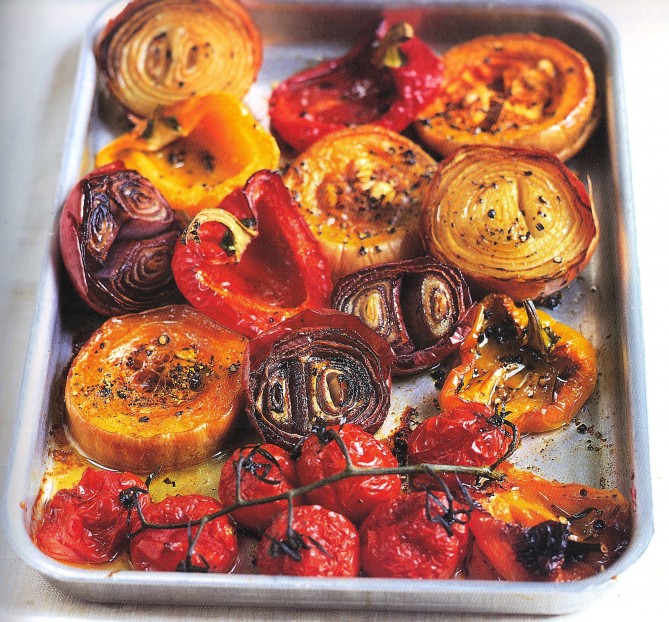 Here in California, where the seasons are decidedly subtle, I mark fall’s arrival not so much by the weather (which may or may not turn cool), but by the arrival of winter squash. My perennial favorite is butternut squash. It can form the hearty backbone of a vegetarian feast, or provide the perfect accompaniment to any roasted or braised meat.

The easy way to prepare butternut squash is to simply slice it in half with a large, sharp knife, scoop out the seeds and drizzle it with a little olive oil. Toss it in a preheated 400 degree oven for about an hour and finish with a little sprinkle of salt.

If you can invest a little more prep time, slice the butternut into disks or chunks and roast it for 30 minutes in a 475 degree oven along with some spanish onions, purple onions, red and yellow bell peppers, and tomatoes. It’s absolute decadence. The flavors caramelize, and leaving the vegetables in their skins while they cook adds a depth of flavor that can’t be gotten any other way. I learned this way of cooking butternut squash from Clare Ferguson’s Simply Good Food. She calls it “Spanish Roasted Vegetable Salad” and I share her recipe here:

Preheat the oven to 475 degrees Fahrenheit.

Slice the butternut squash into 1 inch round disks or chunks. The recipe calls for 1/2 squash, but I usually toss in the whole thing and eat the leftover squash another day.

Cut the bell peppers in half lengthwise, slicing through the stems and leaving them in tact. Discard the pith and seeds.

Put the squash, bell peppers, onions and vine ripened tomatoes into a large, slightly oiled roasting pan. Drizzle half the olive oil over the vegetables and sprinkle with salt and a few grinds of black pepper.

Roast towards the top of the oven for about 30 minutes, until the vegetables are singed, fragrant and soft. Drizzle the remaining olive oil over the vegetables. Serve with the skins on and let your guests discard them as they eat. It’s part of the experience, like eating in a tapas bar in Spain. For added decadence, collect the pan juices in a bowl and pass around some crusty bread for dipping. You’ll feel like you’ve died and gone to culinary heaven.