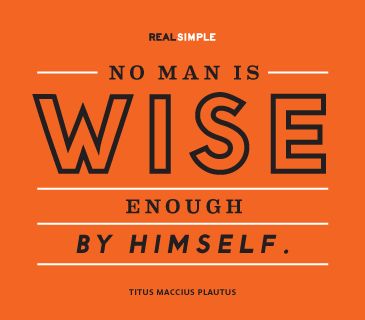 This just about says it all. No matter how smart, wise and creative we are, there’s just no substitute for a second opinion from someone you trust. Writers know this like nobody else, entrusting their babies as they do in the hands of trusted readers who are willing to tell them the sweet and bitter truth. The sweet comforts and encourages (and who doesn’t need a little bit of that?), but the bitter is what helps you grow into your full potential, and there’s no greater gift anyone can give us than that, whether in writing or in our life.

THE WISDOM OF A GOOD FRIEND

A good friend will tell you the truth. She’ll tell you what you need to know so that you can step out of self-delusion into the bright light of the truth. Her truth-telling is a sledgehammer, helping you break out of your confining shell, or a gentle wind nudging you on.

THE WISDOM OF RUNNING WITH THE PACK

A crew of friends and fellow-travelers, your pack, your posse, your tribe, is a second, indispensable tool. These are the people with whom you share a primary orientation out in the world. Sometimes this breaks down by profession — politicians often have other politicians in their pack, journalists have other journalists, lawyers other lawyers, entertainment folks other entertainment folks, full-time parents other full-time parents — but the best packs also include people who share with us a defining world-view, though not everyone in our pack needs to share our worldview. Sometimes it’s enough that they’re supportive and have something to offer, whether that’s mentoring, honest feedback or advice they can offer us precisely because they see the world differently than we do (though not so differently that ne’er the twain shall meet).

The wisdom of the pack is that it energizes you. I learned this lesson from my SpinPimp Janet Fitzgerald, former owner of the slate floored, marble-Buddhad Body & Soul spinning and yoga studio where I used to spin and current SoulCycle goddess extraordinaire. Janet insisted we ride with the pack, by which she meant that we were all on the same beat and that our we were fully in the ride, mind, body and soul. She didn’t tolerate any of that squirrelly looking around. Talking was verboten. If you were thirsty, you took a drink in the middle of the song and you did it on the beat. She also taught me that riding with the pack doesn’t extinguish your originality — at least it better not. We could hoot and holler and dance to our hearts content — as long as we stayed on the road and on the beat. We were there, she reminded us, for other people as much as ourselves, and what we gave them we more than got back. A pack that rides well together will push everyone to the top, each in his own time and his own way. That pack energy is a kind of wisdom too. It’s the wisdom of feeling, viscerally, in your body, who you are and how you are connected to everyone and everything else. It’s the wisdom of remembering that, though you are alone in your body, you are not alone in this world.

THE WISDOM OF FINDING A PARTNER IN LIFE

On some level, even the most recalcitrant among us know that there is nothing more important than finding partner with whom to share the whole of our lives, and the sooner the better, within reason of course. Of course you can’t just order up a partner at a restaurant. Would but it were so. What you can do, however, is get out of your own way. For me that meant clearing out the dead underbrush of my past disappointments and fears and whittling down my list to the two things that really mattered to me: that my husband be responsible and kind. I lucked out, he’s handsome and funny too. What he isn’t is an artist, the one thing that in my youthful folly I thought I had to have. Just goes to show you.

The wisdom of finding the right life partner as soon as makes sense is that having one means you never have to go it alone. When I was young, I thought I needed to have my career established before I found my love. If I had it to do over again, I would have married relatively young, by my late 20’s if I had my choice, and spent my youth supporting my partner and being supporting as we both built our dream careers. Dreams are easier to build, after all, if you don’t have to go it alone, which may help explain why most successful, heterosexual men traditionally got themselves a wife.

Your life partner will also offer you their wisdom, which may differ from your own in ways you can profit from, personally and otherwise. My husband, who is milder-mannered than high-strung me, has influenced me in that direction and I have brought out his more boisterous, balls out funny side. His cautious side protects us, while my risk-taking side sets us off on grand adventures in our lives — and since we both want to survive adventuresome lives, it ends up being win-win. And then there’s the simple wisdom of his presence. By standing with me always, my husband taught me that I am not and never was alone. He who reminds me in word and in deed just what it is I’m made of, who has given me time to root down deep into the molten Earth of my being, and to send up shoots that are beginning to grow into a strong, majestic tree. When I might have cut and run, opting to become a safe but cookie-cutter facsimile of somebody else, he reminded me of the wisdom of always trusting that I know what I am doing, even when it seems to me that I’m lost. He is the one who taught me that lost is also fertile ground.

Turns out, I do know what I’m up to and I did know all the while. Looking back, I can see a clear logical throughline in everything I’ve done, even the things I regret (mistakes were made). Even in my most confused moments, I knew who I was and what I was fundamentally about and in recent times, it has taken on a definite shape. I have goals that I would not have set, or not set so clearly, without him by my side. I have a clear plan. Heck, I’ve even got a timeline. I also have the wisdom, honed over many conversations with good friends, my husband among them, to be flexible with my plans, and let them evolve, as new information or new opportunities emerge. Finally, I have the wisdom of peace, and peace as it turns out is where every meaningful thing begins. I learned this lesson in Hollywood, a place where peace is a scarce commodity, and I learned it from my husband, who has enough distance from Hollywood to see through the Hollywood smog of fear that keeps so many of us in a constant state of anxiety, trying to anticipate what “they” will want next. Here’s the thing we miss: that we are the “they,” and that those who trust themselves most of all while remaining mindful of the people they serve, both the audience and the executives whose job it is to shepherd movies and TV shows through, who rise the highest and stay the longest. These are the people around whom creative empires are built because they have something useful and original to say. That’s the wisdom I’ll take to the bank.

Of course no one stays on top forever, the wise man doesn’t try. When we’re surrounded by people we love, who love us — not the fair-weathered friends who love us when we’re on top, but the true blue, who stand with us in every season — we won’t much mind. The descent, after all, is beautiful too, with it’s panoramic view of all the riches this life holds.