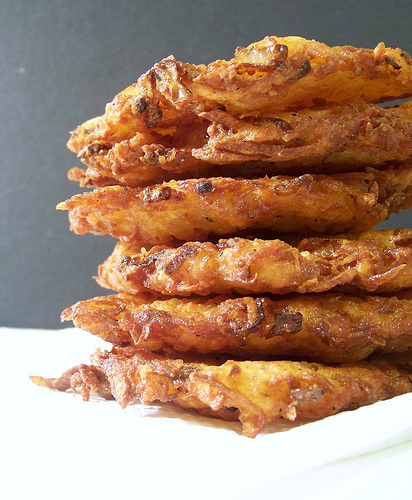 This year’s Chanukah commemorates new beginnings for my family as I emerge from the ruble of protracted divorce to re-build a new life with my three-year-old and my amazingly patient and loving fiancé, Dane.  My daughter Ruby does not yet comprehend the idea of being Jewish, and this year I am introducing to her the rituals of the “Celebration of Lights” since last year she was too young to absorb it.  Dane, who is not Jewish, will be learning about the holiday right along with her.

At bedtime, Ruby asks me “what are you going to be for Chanukah, Mommy?” A plausible connection to Halloween, I suppose, which is still in the rear view mirror.  I don’t have a real good answer and, to buy time, wholeheartedly endorse her plan to be a fairy. Since the family Chanukah party this year isn’t until the end of the week, the best I can do right now to show her that this week is different from all others is to make sure we light the candles each night.  Sometimes it’s challenging to make it home in time from work, and Ruby gets to stay up an hour later so we can reinforce the ritual.  As a single mom, I feel the weight of ensuring that these traditions get passed on to her.  Luckily I have a supportive partner in Dane who cheers me on at the sidelines and makes sure the candles are in place as I skid through the doorway.  I recite the prayers in Hebrew, “Baruch atah adonai, eloheinu melech ha’olam…” when my daughter stops me. “No Mommy, that’s not right.”  She sings “Twinkle Twinkle Chanukah Lights” to the tune of “Twinkle Twinkle Little Star,” which she must have learned at her ultra-conscious, all-inclusive nursery school.  We sing her song, followed by the dreidel song,  “Dreidel dreidel dreidel, I made it out of clay…”  A dreidel is a spinning toy with four Hebrew letters, one on each side – shin, hey, gimel and nun – which are the first four letters of the Hebrew words “A Great Miracle Happened Here.”

I explain to Dane that Chanukah celebrates a miracle that occurred in ancient times when the Jewish Maccabees drove the Syrian army out of Jerusalem and reclaimed their temple.  To rededicate the Temple, they lit the Eternal Light with the only oil they had left, enough to burn for one day.  Miraculously, it burned for eight.  So we symbolically light eight candles on Chanukah, starting with one on the first night and adding one each night until there are eight shining brightly in the Menorah by week’s end.

After lighting the candles, I present Ruby with a created-on-the-spot-because-I-didn’t-have-time-to-wrap-her-presents “Chanukah bag.” In my defense, I’m a working mom who is not that organized.  I like to tell myself it’s a green solution to all that wasted wrapping paper.  Each night a new surprise appears in the Chanukah bag.  Last night a pair of Crocs with Tinkerbell jibbitz, the night before a sticker book.

Ruby now says that Chanukah is when we light candles and get a gift.  I blanch at the focus on gift acquisition by my already privileged only child.  But I have my own fond memories of my mother wrapping eight gifts, each with a number on it.  They would taunt me from the fireplace – “Guess what’s in here? You’ll have to wait until night number five to find out.”  They sat beside a giant papier mache dreidel that has presided over Chanukah in my family for decades, our version of a Christmas tree.  It was always filled with candy –the flap on a corner of the dreidel made the candy far more accessible than a piñata.  So, to my mind as a child – Chanukah was far superior to Christmas or say, Cinco de Mayo.  More days of gifts, more candy.  No fat guy scooting down the chimney, an ironic adornment to a home in Miami, Florida. Which is where we will return on Saturday for the big family Chanukah party.  The smell of potato pancakes, or latkes, will drift delectably from the kitchen, as inconceivably huge piles of gifts accumulate by the fireplace.  A mass of little cousins, many of whom haven’t seen each other since last year’s party, run amok as the excitement level reaches dizzying proportions.

After what must seem like an interminable amount of time doing boring things like eating and talking, the kids are finally told to take their places while the designated Chanukah elves divvy up the goods.  It is joyful chaos, and once all the presents reach their rightful owners, my cousin Susan delivers the ground rules: everyone must thank the giver of each gift personally before they can move on to the next one.  “Ready, set… GO!”  It’s a frenzy of wrapping paper and ribbons, kids bumping into each other to deliver thanks in varying degrees of enthusiasm and bewilderment.  At the end of this Olympic endeavor we settle into our nest of shredded gift wrap remnants to sing Chanukah songs and consume dreidel-shaped cookies until the kids begin their slow descent into cookie coma.

It’s a party worth flying three thousand miles for, which is what we are doing on Saturday.  Last year I left the party in tears, a newly minted single mom chasing a toddler and feeling lonely and overwhelmed.  This Chanukah marks the end of a grueling year and the start of a happier one.  I’ll be introducing Dane to my amazing, overwhelming and simply lovely family on the warmest and happiest of holidays – and it just so happens to be his birthday.  He says he can’t think of a better way to spend it.

PHOTOGRAPHY via Hey That Tastes Good

PAM SUCHMAN is a television writer and producer living in Santa Monica, California.