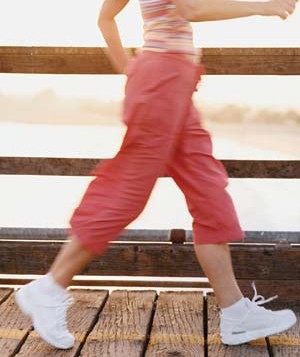 This morning I went for a walk and noticed, for the second time in the last two weeks, that starting my day with a walk —  outside, in the sunshine and fresh-ish air (I live in L.A. where fresh air is more conceptual than real) — is the single most important thing I can do to ensure that I’ll be firing on cylinders all day, better even than yoga and meditation, which is saying a lot. Of course, walking can itself be a meditation. I learned that great and beautiful lesson years ago, at the feet of the famous Buddhist monk Thich Nat Hahn, with whom I once spent a glorious weekend doing walking meditation and listening to him speak and being led by him in beautiful moving meditations in a jam-packed room that reminded me that we are in these bodies, and that our presence here — in these bodies, in this world, in the wheel of existence — matters.

In our religions — or in certain schools of Christianity, Buddhism and Hinduism at least — we tend to shy away from the world. We focus on the reward that will come in heaven, or on reaching the level of evolution that will take us out of the wheel of existence. We revere the Bodhisattva — the enlightened being who has nonetheless chosen to reincarnate or return for the benefit of the world — as if the world were a place to be escaped at soonest opportunity. But what if this world — this beautiful creation — isn’t just a way station, where we do our penance or attain our enlightenment or atone for imagined sins? What if this world is the living body of God (to borrow a phrase I read once somewhere),  and we are luminous beings, who’s job, while we’re here, isn’t to escape matter, but to enter more deeply into it.

I’ve noticed that most people tend to fall into one of two categories: either they embrace the world too much or they embrace it too little. If we embrace the world too much we become avaricious in our ambitions rather than exultant, and that can make us unbalanced within ourselves and in the way we move through the world. You can recognize this kind of person by the desperation with which they pursue their external goals. People who have more than enough wealth or fame to fuel their whole lives yet hunger constantly for more are a prime example of this type. If we embrace the world too little, we become floaty and ungrounded and not quite able to do the work we came for. Even people who’s work has to do primarily with the spiritual plane need to recognize that their work takes place in the world as it is, and that, if they want to have an impact on other lives, they will need to descend into their bodies just as surely as those who are too caught up in the traps of this world will need to ascend into their souls. The old Christian adage, “be in this world but not of it,” seems apt, capturing as it does the importance of fulling entering into our bodies and into our world while remaining rooted in true being.

I’ve found it difficult in my own life to resolve the apparent tension between being the extremely physical, “in this world” person I’ve always wanted to be and being the extremely spiritual and ethereal person that I also am and that I’ve wanted so much to embrace. This tension has shown up in lots of ways in my life. For example, on the one hand I’ve always been extremely ambition. On the other hand, I’ve also shied away from my ambitions. As a result, I’ve done things in half-measures, even while working extremely hard. I’ve been conflicted, afraid to claim the world as my own.

Where other people feared death, I feared life. For years I chalked this up to the memories I’ve always had of other lives and other deaths, deaths, it seems, that I’ve survived. That may explain why I don’t fear death, but the question of why I did fear life remained. In the end I think it’s simple. I feared life because I didn’t know how to strike a balance between the spirit I am and the physical body I’m in. I didn’t know how to be the luminous being that I am — that we all are — while living in a sometimes decidedly not luminous world, but walking, I’ve discovered, is a way in. It connects me to the body that is doing the walking, and to the world that it is walking through. And it reminds me that this body, though it isn’t the eternal me, is me for now. Through this body, the spirit that I am has its being in the world.

I’ve always loved vigorous, high-intensity workouts like spinning, and physically challenging, if slower, experiences like yoga. These things that demand so much of my body speak to the part of me that loves the power of my physical body and the sheer physicality of being alive. Walking, on the other hand, never seemed like much of a workout to me. Walking was something you did to get somewhere — which is why I walked a lot when I lived in New York and very little since I’ve lived in L.A. Well this morning I discovered that, even in L.A., you can walk to get somewhere, though if you live in L.A. — or anyplace where walking is not a primary means of transportation — the place you’re walking to  may be in your inner landscape, rather than your outer terrain. Within 5 or 10 minutes on the sidewalk today, I found that I had walked right into my luminous being. I had walked into the place where my body meets my soul and where my ambitions for myself meet my ambitions for the world. All opposites were reconciled. I became whole. And from that place of wholeness, I can do anything for which I am truly called.

That’s the goal for all of us, isn’t it? To find that place of peace and power from which we can do our best, most fearless, most authentic work in the world.

Walking will probably never feel like a “workout” to me (though I’ve noticed it’s more of a workout than I thought), but it will always be the ultimate mental health break. It’s how I hope to start every day for the rest of my life. Walking fills me with a sense of wellbeing. It clears my head. Something about the moving nature of it allows me to think things through without dwelling or getting stuck the way I can if I ruminate from the couch. It reminds me that I am both a body and a spirit moving through this world, and that I have been called here as we all have, into this body, to offer my gifts to the world. This is true for each of us, however grand our modest our offerings may be or seem (for we cannot measure our gifts by the delusions of a hungry world). These bodies, though they are decaying, though they are impermanent, though they will one day be gone, are as luminous as our souls. With these bodies, we offer all we have to the world.