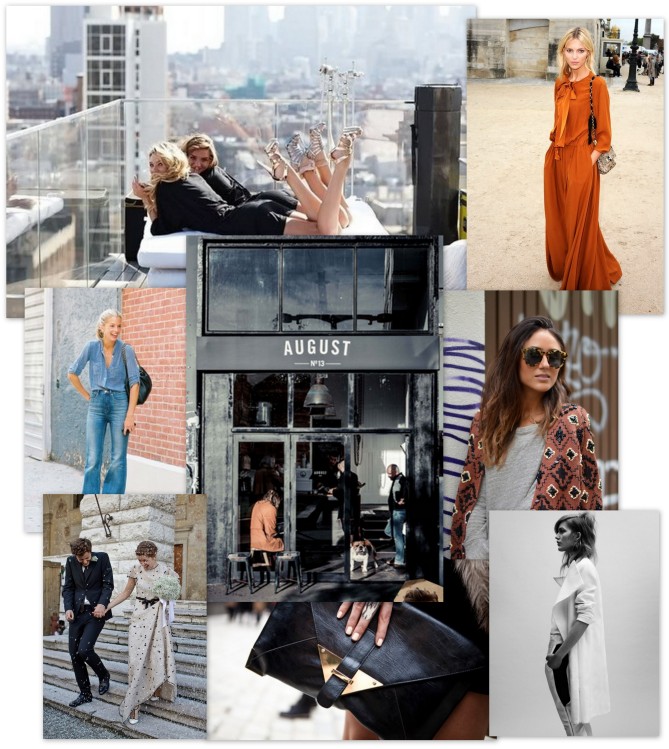 What’s modern? What’s glamorous? It’s a question I’ve thought a lot about, having lived three different sartorial lives in my decades on this Earth.

My sartorial beginnings were in a small city in the American South, capital of a state you could easily forget was part of the Confederacy if South Beach were all you knew. Tallahassee, the kind of place where football reigns supreme,  Live Oaks drips with Spanish Moss, and the festivities surrounding the annual Springtime Tallahassee Parade count among the social events of the year — in certain fair quarters at least. Thirty minutes from Georgia, Tallahassee is very much “of” the South. Growing up I found it genteel and idyllic, but modern it was not. I got on the first train out of there the moment I turned 18 — or, truth be told, two months later when college was set to begin.

Aside from my early years, the four years I spent at college, and the year when I decamped to Virginia to my father’s house, to write and recover from illness, I’ve lived inside the bubbles that are New York and L.A., sartorially distinct cities that have shaped my sense of what’s modern and what’s glamorous, as surely as the half life spent in the American South shaped my sense of what’s proper and prim.

In the American South, glamour is not the goal. Southern dressing is about elegance with a ladylike twist. A slip or pantyhose might be involved (garments that haven’t seen my body in a good twenty years). Things are inclined to match,  purse to shoes, necklace to dress. Pretty is not out of the question, and edgy is just not a thing. At least that’s how it was when I was there lo’ those many years ago. I didn’t see edgy until my second year in law school when, the all work/no play marathon of first year law school wore off and I discovered the city around me, and the easy chic of all black.

I converted to black the way a nun betroths herself to God: wholly and passionately. I loved my mostly black wardrobe. It was chic and pulled together and effortless (a word I think of as synonymous with modern). Then I moved to L.A., and all bets were off. If New York is sleek and pulled together and of the moment, L.A. is relaxed and laid back, the kind of place that marinates in the present and the distant past.

Every place leaves its fingerprint on the imagination, but L.A. has left an imprint deeper than most. It’s the place that taught me the very modern art of being smashingly, spectacularly relaxed.

In L.A., dressing up isn’t a production. You wear what you want, you come as you are. There’s something unspeakably freeing in that (even if it does mean that someone shows up at your formal event in flip flops). It’s freeing me to explore the mash-up of sartorial influences that have defined the decades of my life, and to find the mix that makes me feel at home wherever I go in the world.

Modern glamour isn’t about the occasion; it’s about the woman. This doesn’t mean you wear blue jeans to the Oscars, but it might mean you wear the dress that, for all it’s pow, feels like something you could wear around the house. Because, L.A. rule, there is no need to feel stuffy just because you’re dressed up.

L.A.’s relaxed dress mandate has made me fall in love with fashion again, not as something you wear on a special occasion, but as something you wear every day, because that’s the thing about modern glamour. It’s a lifestyle; not a special event. After years of living in L.A., I am finally returning to my Southern roots, which are steeped me in a brew of color and pretty that suddenly seem right when paired with gypsy jewels or an edgy, statement-making heel. It’s a  Southern city girl-meets lady of the canyon vibe that feels just right.

I’d be lying if I said I was there yet. I am still defining my style and lord knows I’m still building a wardrobe that really feels right. The two selves I’ve been, the original and the acquired, war within me still, but lately they’ve started to coalesce into one coherent whole. I find myself drawn to pretty Southern girl dresses with a twist, and to dressed down city girl ensembles made new under L.A.’s frontier light. This year I’m longing for a stack of colorful dresses that float across the body and nip in at the waist, dresses I could wear to a Springtime Tallahassee parade, or, more probably,  rock here with a sandal and a hobo bag, or a high-heel bootie that could make the primmest of dresses look punk rock.

I’ve also got my eye on a sleeveless coat to wear with a lounge-worthy tank and a pencil trouser or jean. It’s this kind of magic — the mixing of something high-fashion and exceedingly well-designed with something easy and relaxed — that embodies modern glamour for me. Modernity, after all, is about feeling comfortable and looking fierce. It’s about color and imagination and understanding that you can never have enough oversized clutch bags, or too much jewelry, or too many varieties of boots or shoes. It’s about putting it all together with an L.A., devil may care swag.

This point was driven home for me recently at a rooftop party that specified cocktail attire. It was Sunday night and my first impulse was to throw on something easy, say a cobalt blue maxi and some vintage Turkish jewels. But the Southern girl in me kicked in, and I put on a proper dress and heels. At some point about an hour in, the best dressed women of the night cascaded in in their haute hippie maxi dresses, comfy wedges or heels, and a tasteful pile-on of jewels. They looked as glamorous and relaxed as Sunday night.

You can check out our Modern Glamour Pinterest board here.