I’ve given up hating for good. Not that I was ever much for the hating game, but I have my opinions, shall we say, and they’ve fallen hardest on the things in life that seem, to my overwrought eyes, a little slim on substance, if you know what I mean. I have a deep thinking, philosophical bent, which does have its place, but as I sink into the sweet spot of my own creativity — something that’s been happening like hot cakes these last several months — my appreciation for those who boil it down to the essence of things only grows. Not that you’ll find me lining up any time soon for any surface-only thing. I still want there to be there there. But these days, I’m as ready to engage the signifier of a thing as I am to plumb the deeper, murkier depths, which is another, wordier way of saying, I have fallen hard for the braggadocio and metaphoric freestyle that is hip hop — and no one emblemizes that more than my new role model (a.k.a. “my daddy”) Jay-Z, whose 12th solo studio album, “Magna Carta Holy Grail”, dropped on July 4th, to an intriguing and mixed passel of reviews.

I haven’t listened to the album in its entirety, though I have sampled a few of its juicy parts, so I won’t review it here. I will, however, review the reviews, which are fascinating for what they have to say about ____. Matthew Jacobs, writing at the Huffington Post, summing it all up when he wrote,

“The New York Times claims ‘Grail’ is filled with ‘ups and downs,’ while The Los Angeles Times feels it’s ‘full of empty boasts.’ USA Today, on the other hand, awarded the album a perfect four-star review.

Jacobs samples from a few of the reviews.

From The LA Times: “{A]t their best, as on ‘BBC’ and ‘Heaven,’ the producer and rapper move with the coordination of expert magicians juggling Champagne bottles and knives.”

From USA Today: “The breadth of his subject matter — which also touches on family, loyalty, spirituality and fame — is matched by his lyrical acuity. His perspective is that of someone who has achieved much but hasn’t lost sight of what brought him to this point.”

From The New York Times: “Often, Jay-Z’s boasts are contested by tracks with their own stubborn agendas: minor keys, empty spaces, unyielding arrangements that make his rhymes dodge and weave around them… Though Timbaland’s productions always hold some sly surprises, ‘Magna Carta Holy Grail’ comes across largely as a transitional album, as if Jay-Z has tired of pop but hasn’t found a reliable alternative.”

From The New York Daily News: “Jay’s long track record of hits may have emboldened him to go deep this time…Lyrically, it seems like he’s trying to live up to a famous rap from 2003’s ‘The Black Album’ in which he admitted, ‘If skills sold, truth be told/I’d probably be lyrically Talib Kweli.'”

What to make of all this? Is “Magna Carta Holy Grail” (“MCHG” for short) deep or is it shallow? Is it a work of musical mastery, or did Jay-Z just dial it in? Or, is it time perhaps, to step past the simple dichotomy and embrace a more nuanced appreciation for what it is — and what it requires of you — to make art in the public square? It’s a question I’ve considered a lot over the years as I skewed more towards the purity of high-minded “art” while secretly (even to myself) running scared from the deeper challenge of trying to make art that also connects deeply with other human beings on the grounds of our common humanity. My work, more art film than blockbuster, was a place where I was working out a very personal agenda. It’s where I was trying to define who I was against a world of people who had their own ideas. It would take me years to figure out what Jay-Z knew from the start, that you gotta do you, man, and if you want this “you” person to connect with a larger world, to have an existence, out there somewhere on the world stage, then you’ve got to figure out how to connect the authentic you with an authentic world. You’ve got to translate your ideas, in other words, into something the people can use and consume. 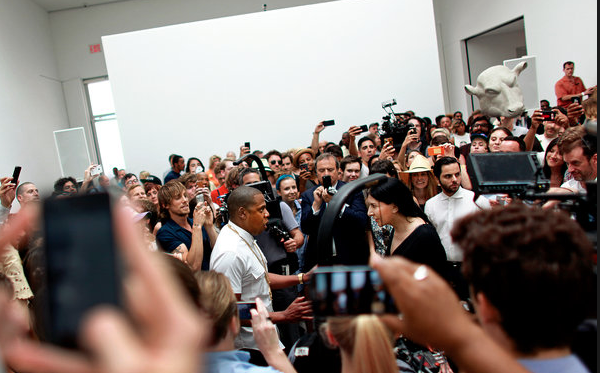 With “Grail,” Jay-Z masters the fine art of juggling the surface and the deep — or champagne and knives as The New York Times so sonically put it. He’s exploring big themes and he’s making commerce. Which is why he’s my daddy —  ahem, new role model. He’s even gotten the “real” art world involved, partnering with some of the art world’s finest to make the video for his single, “Picasso Baby.”  Of course, people who make art in the “real” art world are, by definition, not selling to the masses. They’re selling to a select few collectors, Jay-Z among them, who are rich enough to buy a ticket to the dance. However, they are, I believe, speaking to the masses. Marina Abramovic (that’s her above, facing-off with Jay-Z in a moment that’s gone viral) is a case in point. She speaks so _________ that she reduced people to tears just be sitting across from them in silence (for a total of 700 hours) for her performance piece, The Artist Is Present, which ran at New York City’s Museum of Modern Art (MOMA) in 2010. Ambramovic and Jay-Z, each in their way, serve up the visceral impact of their presence, which is why their collaboration — and _____ — makes sense. Though you wouldn’t know it from her chosen medium of fine art, Abramovic is as savvy as Jay-Z about making herself the provocative point. I suppose, then, that if Jay-Z is my career role model “daddy”, Abramovic is my mama, and what a mama she is. 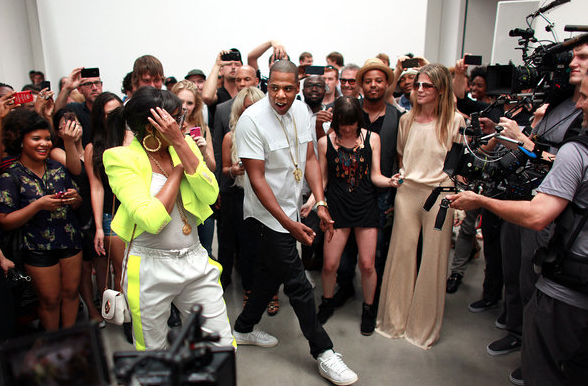 In the mix, the actress Taraji B. Henson, the hip hop keeper-of-the-throne Jay-Z
and the art world impressario Yvonne Force Villareal.

Here’s what I’ve learned from my mama and daddy:

One. Always go for yours.

Three: Drive your own ship.

Five. Do it “out there” where the people can see you. Sometimes they’ll like it and sometimes they won’t, but that’s the price of admission if you want to live a powerfully authentic life. 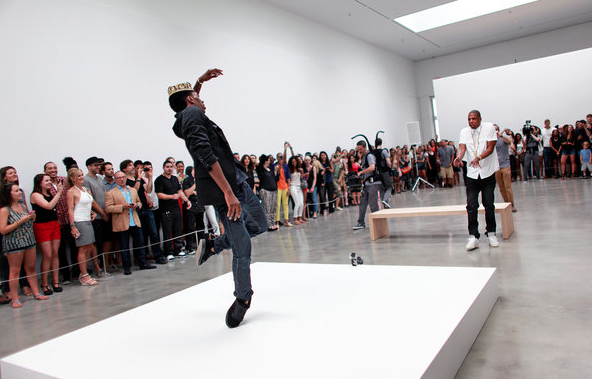 An audience member steps to the throne.

“The people” lined up outside the Pace Gallery in Soho for a chance to be a part of the “Picasso Baby” action. They must have realized, with Jay-Z in the house, that things were ’bout to get dope.

The dopest thing about Jay-Z by far isn’t his wealth, his fame or his famous wife. It’s the heartfelt way he seems to go about doing even the most commercial of things. I haven’t been a fan over the years, though I’ve enjoyed many a Jay-Z song, but recently, watching Jay-Z on Oprah’s Master Class, I developed a new appreciation, for the musician and the man. He has walked where I wish to travel, through the travails of both failure and success, and he has emerged, victorious, not just for one album or one or two years, but for decades. He just keeps growing and expanding and flowing and never seems to doubt that, whatever the haters may think (or, for that matter, what the lovers may think), he is up to the task and worthy of his seat on the throne. Would that we all walked with life with a confidence like that.

So call it braggadocio if you must (which Merriam-Webster tells us is “empty boasting,” “arrogant pretension,” “cockiness”). Say his album is “full of empty boasts.” Say what you must. But understand this. Sometimes, to ascend to throne that’s waiting for you, to tune out the voices of all the naysayers you’ll encounter along the way, to ignore your conditioning and do the thing that you know in your bones you must, you need a little cockiness under your belt. Rappers no this like none other, at least those like Jay-Z, who ascended from poverty and drug-slinging over insurmountable odds. If you should happen to ascend too, over whatever internal or external obstacles stand in your way, I bet you will guard the throne too.

The people, outside the Pace Gallery pre-event.