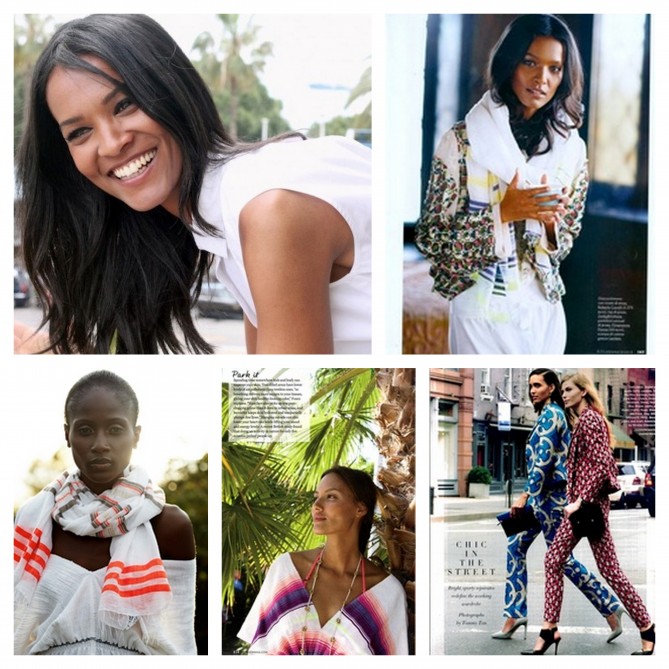 Liya Kibede, the international super model — and Ethiopia’s native daughter — isn’t resting on her laurels. This girl works. She works the runway. She works a magazine layout and she can definitely work an ad campaign. She works LemLem, the fashion label she founded in 2007 with the goal of putting traditional Ethiopian weavers back to work. She works The Liya Kibede Foundation, her namesake foundation dedicated to saving the lives of birthing mothers and children by ensuring that every woman, no matter where she lives, has access to life-saving care. She even works the silver screen, having appeared in nine films, including the Matt Damon starrer The Good Shepherd and Desert Flower, based on model and anti-female genital mutilation activist Waris Dirie’s novel by the same name.

Kibede was born in Addis Ababa, Ethiopia in 1978, to an airline executive father and a mother with a career in public relations. She tiptoed onto the modeling scene in 1998, after being discovered at Addis Ababa’s French school or lycee. Her career began in Paris, and ended almost as soon when, discouraged by the apparent limitations for girls who looked like her, she moved to Chicago where one of her brother’s lived, and took up life as a catalogue model. Destiny had other ideas. The year after she decamped for America’s mid-West, Tom Ford plucked her out of obscurity by casting her in his Spring 2000 show. The rest, as they say, is history.

Kibede married investment banker Kassy Kibede in 2000. That same year, she and 15 of the world’s top black super models were photographed by Annie LIebovitz for Iman’s book I Am Iman. A month later, Tom Ford made her the face of his African-inspired collection for YSL Rive Gauche. A year later, in 2001, she and her husband Kassy welcomed their son, Suhul.

By 2002, French Vogue had dedicated its May issue to Kibede. By 2003, Kibede had became the face of Dolce & Gabbana, appearing in an ad campaign shot by the influential fashion designer Stephen Meisel. Later that year, she signed a $2.7 Million contract with Estee Lauder, becoming the first woman of color to represent the storied brand. By 2004, she’d landed campaigns with Louis Vuitton and Balenciaga and appeared with a group of “Models of the Moment” on the coveted September cover of American Vogue. From there things got even more interesting.

In 2005, Kibede was named a World Health Organization Good Will Ambassador for Maternal, Newborn and Child Health, appeared on the cover of the May issue of Ameican Vogue (this time sharing the cover with no one), and  gave birth to daughter, Raee, her and Kassy’s second child. By 2006, she’d appeared in The Good Shephard. By 2007, she’d launched her socially-conscious fashion brand, LemLem, become the face of Lanvin, and been ranked one of Forbes Magazine’s world’s highest paid models.

Kibede’s modeling career hasn’t let up and shows no signs of letting up soon. Neither does her commitment to using the platform she has to help make a material difference in the lives of women and children in our world. Kibede’s humanitarian efforts have not gone unnoticed. In 2010, she was named one of the World Economic Forums Young Global Leaders, and named one of the 100 most influential people in the world by Time Magazine. Thank goodness she likes to use her powers as a force for good! Her old friend Tom Ford, in an essay he penned for her profile in Time magazine, speaking of Kibede’s devotion, drive and desire to better our world had this to say: “Liya’s work comes from a place of sincerity, and her beauty is much more than skin-deep.” Today we take our hats off to a beautiful woman who has taken all the gifts she was given and woven from it a more than beautiful life.