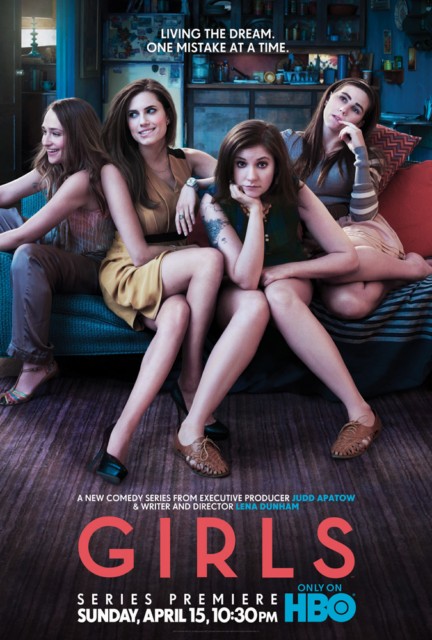 Spoiler Alert: If you haven’t seen the last two episodes of Girls, you may want to see them before you read this post.

I like Lena Dunham. I liked her feature Tiny Furniture. I like (make that love) that after the major publishing houses duked it out in a bidding war amongst themselves, she sold her book of yet to be written for a whopping 3.7 Million dollars. And I love that she bagged her Grammy winning boyfriend while being shamelessly, unabashedly, “you might be over-sharing a bit” zaftig. Oh, and did I mention that she’s all of 26?

But Girls, the show Dunham created, stars in and helps executive produce? I hate it, the way you hate a train wreck you  can’t look away from — which may explain why I’ve seen every single episode, even though, in the immortal words of my absolute favorite person, they make me want to “barf up.” That is, until last week, when Girls turned the corner into something resembling truly great television. Don’t get me wrong. It was still depressing as all get out. But this time it was depressing in the service of a higher good, namely, the hope that, if you face your hard truths, your life might turn out truly good.

The problem with what I call “early Girls” is that the erstwhile girls of Girls (because, honestly, at this age, they’re women) seemed disconnected from actual life, as if they’re the inhabitants of some land of misfit yet molly coddled toys, to paraphrase my favorite line from 2012’s superbly under-rated Perks Of Being A Wallflower. Come to think of it, their overgrown childlike, not quite grounded in reality natures might be why she decided to call them “girls”.

Last week, Dunham took the kid gloves off and grew her girls up into something resembling women. If this week’s episode is any indicator, this direction will continue in weeks to come. The girls of Girls are beginning to suffer the kinds of slings and errors that grow you up. Hannah is finally enjoying some writing success, and it sends her skidding into  obsessive compulsive free fall . She’s coming unhinged in ways that shed new light on all her strangeness and struggle and the odd bursts of nudity — bra-less in a net tank top while traipsing the streets of New York, topless while playing ping pong with a man she stalked to his home, mooning us while she pees beside the railroad tracks. All Hannah’s aimlessness and randomness were symptomatic of larger, darker truths. Her fragile nature. A fear of success so primal it has her plunging Qtips into her eardrums and compulsively counting to eight while she twitches or who knows what.

Then there’s Marni. Beautiful, focused, neurotic Marni. She’s taken a tumble that we might have seen coming: Hint #1: the  gallerina in an Ann Taylor suit. But sometimes beauty blinds (which may be Dunham’s larger and very meta point) and keeps us from seeing the mess that’s before our eyes. First she loses her gallery job (yes it was the Ann Taylor suit), and turns into a pumpkin in a cocktail hostess short-suit. Then, her beleaguered ex-boyfriend joins the ranks of suddenly wealthy tech entrepreneurs on the strength of a single app. To top it all, she discovers she’s still in love with him — and no,  it isn’t the money (because she don’t even know how much money he has). And yet it probably is the money, even if she has no clue.

Dunham and team’s genius these past two weeks lies in the way they’ve explored the theme of in dependence. Hannah and Marni want to be independent career women, they may even attain to those heights some day, but for now they’re using their escape hatch. In a moment of desperation, after trying and failing to reach the flown the coup Jessa, Hannah calls her ex-boyfriend, who when he sees her twitching on Face Time, runs through the streets to rescue her from it all. Meanwhile, Marni’s ex-boyfriend is loving her back, he has always loved her, he will never let her go. Like so many women twice their age, these girls on the verge of womanhood want to be independent, and not, all at the same time. For now, at least, they’re leaving the independence to Jessa and Shoshana who, in this week’s episode, broke it off with her beau. The irony is, letting themselves receive the support they need just may propel Hannah and Marni toward the career success they seek. That wouldn’t surprise me at all. One Dunham’s generation understands, after all, is that it isn’t career or love; it’s both.