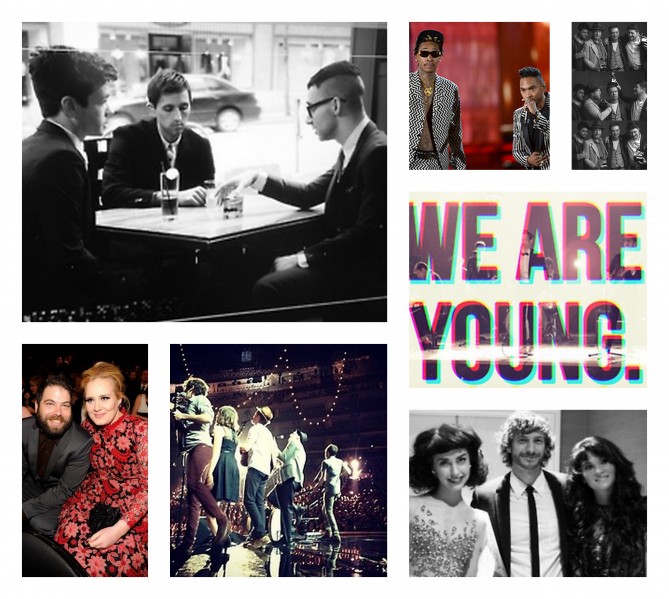 I awoke Sunday night like Rip Van Wrinkle to the Marvin Gaye-esque, Prince-like magic that is Miguel.  He killed it last night at the Grammys, performing his Grammy winning “Adorn” with Wiz Khalifa, who appeared on a remix of Adorn on Miguel’s album Kaleidoscope Dream.

The Lumineers killed it too, taking to the stage with their joyous, infectious, Grammy nominated “Ho Hey,” as did Mumford & Sons, the down-home looking British Band whose Babel won Album of the Year.

One of my favorite Grammy moments was when Gotye and Kimbra took to the stage to accept their Record of the Year Grammy for “Somebody That I Used To Know” from none other than Prince (and, yes, they were as geeked up as you would imagine, and Prince was eternally cool). When Adele took to the stage to accept her Grammy (for Best Pop Solo Performance), her signature, game-dame, over the top charm reminded us all why she’s not only one of the best singers in the world, as more than one observer has noted, but a bonafide superstar who, like so many of the artists coming out of England these days, arrived at stardom the old fashioned way: by making great music that comes from the soul.

If you don’t recognize the artists in the image above, many of whom shot to superstardom with Sunday night’s Grammy performances and wins, they are, counterclockwise from top left, Fun. (yes, with a period at the end, and the guy with the fauxhawk dates Girls creator and star Lena Dunham), Wiz Khalifa and Miguel, Mumford & Sons, a visual shout out to Fun.’s We Are Young, Kimbra and Gotye with friend, The Lumineers, Adele with boyfriend Simon Konecki. You’ll be seeing a lot more of all of them for years to come.