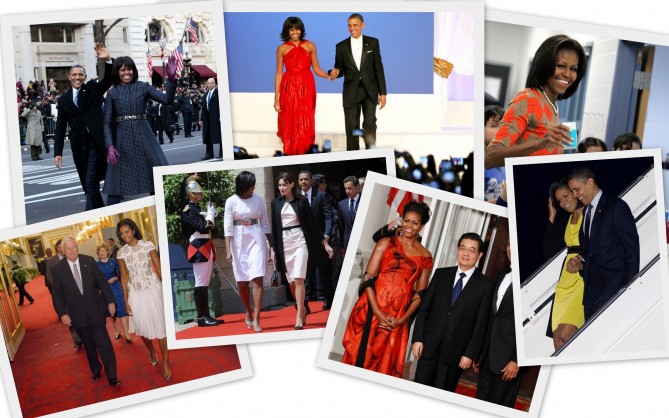 First Lady Michelle Obama has modernized First Lady-dom and become a cultural icon in the process — by daring to  wear a sartorial and culturally diverse cadre of designers who were previously known only or mostly to the fashion (and fashion watching) set, championing the cause of the kitchen garden and joining the conversation about exercise and healthy natural food, and raising along with her husband two self-confident, lovely and well adjusted girls (quite a feat when you’re doing it from the White House, as former first daughter Jenna Bush attested on Inaugural Day), and simply by being the first African-American woman to occupy the First Lady spot in the cultural pantheon. Is it any wonder she was live-streamed into The Academy Awards?

I would have mussed her bangs up a bit. I would have liked to see her un-flanked by those fine servicemen and women. And, frankly, I wish she’d pulled a Bill Clinton and waltzed out on the stage in some couturier’s gown (I’m thinking Valentino or Alexander McQueen), the same way Bill Clinton did (sans the gown) at this year’s Golden Globes, but it was still a thrill to see her, and both Mrs. Obama’s and President Clinton’s appearances at Hollywood awards shows made a certain kind of sense in this, the year of the political film. With Lincoln, Argo and the unfairly maligned Zero Dark Thirty all making a handsome showing at the box office and the award season ballot box, it seems only fitting that a former president and our first lady in full would join in on the fun.