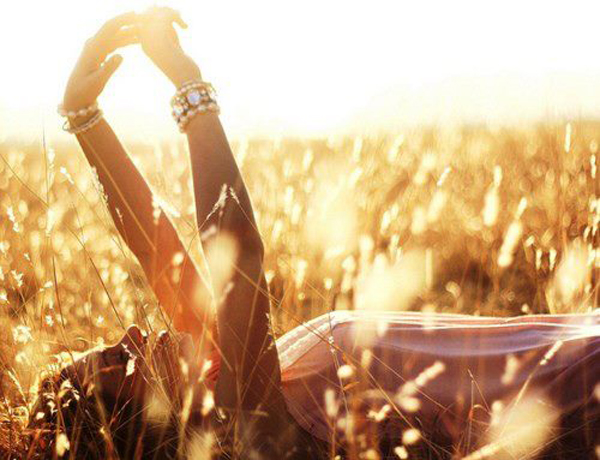 TFRL is an ongoing series about the journey to The Fully Realized Life.

It’s tempting to want the things you do not have — especially if you’ve suffered significant loss, or fallen short of achieving cherished goals. I’ve found, however, that by focusing on what I already have and wanting that gets me closer to the life I really want. Why should this be so? The other day, I came across an interview on food and lifestyle blog Sous Style with supermodel Kiara Kabukuru, who shared her thoughts on inner and outer beauty, including this gem: “Beliefs are only thoughts we keep thinking; reality is only beliefs we continue to believe.” This has the ring of the mystical about it, but her words also have their corollary in the practical-material world. It turns out, the thoughts we think about the nature of our own past and present lives shape our beliefs about the nature of life itself. That, in turn, shapes our beliefs about what our lives can be in the future, thereby creating a feedback loop that affects our actions in ways that are more likely than not to give us more of the life we already have. It’s why the old adage from the bible “the rich get richer and the poor get poorer” so often comes true, literally and metaphorically. There are exceptions to the rule, of course, like the rich athlete or entertainer who runs through all his money and ends up broke, but the general principle still applies. Instead of wanting what they had, they wanted what they didn’t have, and being cash rich they went out and bought it — which is how they ended up broke. Wanting what you have interrupts the poor-get-poorer feedback loop (and, that’s the one we’re really concerned about) by causing you to focus on what is valuable about the situation you’re currently in. This can be tricky, especially if you’re going through hard times. It’s also when you need this technique the most, both to move your life forward (when this is possible), and to improve the quality of your life even if your circumstances — for example, terminal illness — can’t be changed.

Let’s say you’re a lawyer turned TV writer who’s career has taken a downward turn. You’ve started writing a novel and it’s going exceedingly well. For money, you take a job as a paralegal at a rate of pay that will allow you to easily provide for your needs while simultaneously bringing you back in contact with criminal law, something that happens to dovetail nicely with the novel you’re writing, which takes place in the world of crime. You have two options. You can focus on the negative side of the story (the fact that you’re a lawyer who is now working as a paralegal) or you can celebrate the fact that you’re a novelist who has the opportunity to make a living doing something that supports your ultimate goals. Option one comes with all kinds of psychological liabilities, ranging anywhere from full-blown situational depression to mere unhappiness. Option two, on the other hand, comes bearing all kinds of psychological gifts that look something like this: “Oh this is great. I’m in the exact position I need to be in to write this book. Thank goodness I’m not the lawyer on these cases because, if I were, I would have so much responsibility that I wouldn’t have the time or head space to write. And you know what, in an odd way, it’s kind of a good thing that my TV career is in a lull because, if it weren’t, I’d be too busy with the demands of that career to give my novel the attention I’ve been able to give it these past few months. You know what? I’m a great writer. This novel I’m writing is really good. If I keep going, and I hustle, and I reach out to all my contacts, I bet I can get a publisher. This could be the start of a whole new career. And who knows, it might even get turned into a TV show before it’s said and done.” Much better, huh?

By shifting your perspective from how your present circumstances are awful to how they are full of possibility, you literally change your reality, not through magic, but because the shift in perspective causes you to see possibilities that you might have missed and to take fruitful actions that you might have overlooked. This is not to suggest, of course, that we have complete control of our lives. We clearly do not. We’re born into certain circumstances. We have certain temperaments and tendencies. Some doors open for us; others do not. And yet, choosing to want what you have, an act of imagination that causes you to find the good in whatever circumstances you face, is the difference between living a life that’s strangled by the heavy hand of fate, and living a life in which your destiny is fulfilled (and by destiny I mean those highest possibilities for your life which are ever present if only you can grab ‘hold of them and make them real, not just in your mind, but in the world).

Turning the possible into the actual begins, always, with an act of faith, an act of imagination, an act of rendering the obstacles null, however tangible they may now be. It is the way of man, after all, to overcome every obstacle to progress. It is how we’ve eked civilization out of hunter-gatherer beginnings, and how we’ll eke a new, sustainable world out of the one that we’ve just about run into the ground.

In The Varieties of Religious Experience, William James said this about “the religion of healthy-mindedness,” a concept closely aligned with this business of wanting what you have:

“If, then, we give the name of healthy-mindedness to the tendency which looks on all things and sees that they are good, we find that we must distinguish between a more involuntary and a more voluntary or systematic way of being healthy-minded. In its involuntary variety, healthy-mindedness is a way of feeling happy about things immediately…” [No doubt because they have gone well].

“…happiness, like every other emotional state, has blindness and insensibility to opposing facts given it as its instinctive weapon for self-protection against disturbance… To the man actively happy, from whatever cause, evil simply cannot then and there be believed in. He must ignore it; and to the by-stander he may then seem perversely to shut his eye to it and hush it up.”

“But…the hushing of it up may, in a perfectly candid and honest mind, grow into a deliberate religious policy, or parti pris” [or prejudice]. Much of what we call evil is due entirely to the way men take the phenomenon. It can so often be converted into a bracing and tonic good by a simple change of the sufferer’s inner attitude from one of fear to one of fight…[emphasis mine].”

It is this attitude of fight that I speak of when I suggest that instead of lamenting what we do not have, we embrace wholeheartedly that which we do — even if it came unbidden, and contrary to our will. In this way we work the alchemical magic of turning base things into gold. I have just begun my own journey of deeply desiring what I have, but I can already see a change in me, and catch a whiff of change in my life. As I connect my own deep longing to the things I already have — my husband, my health, my lovely and amazing friends, my unique and original mind, my original voice, my beating heart, my fireplace, the temperate weather of my Southern California home, the fresh and healthy food in my refrigerator, the best Christmas tree ever, which stands right now in our living room — I am becoming someone new, someone who’s been reborn to a reality that’s brighter than the one I’d knew before. I do not hunger, because I am already filled. And as the saying goes, “The rich get richer.” And so…

IMAGE via One Part Gypsy