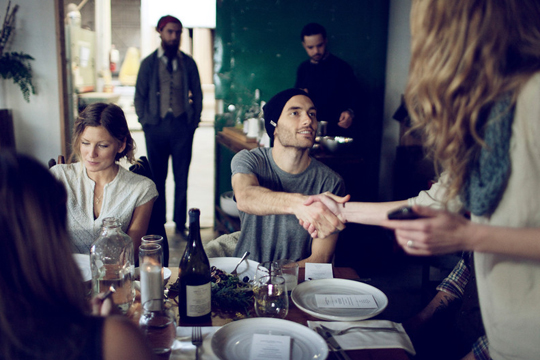 Thanksgiving is the one holiday that has the sole purpose of bringing people together around the dinner table just so they can spend time together (okay, and eat a really delicious meal). A whole holiday dedicated to connecting? I’m all in. So in that I’ve decided that, from now on, I’m to have Thanksgiving all year long. In other words, I’m going to treat every day like the opportunity to connect it really is. I’m going to step out of my protective Cancer crab shell and take more risks, in order to connect more deeply, with more people than ever before.

It’s the kind of major shift that’s hard to make precisely because it’s in-line with who I am, only in some alternate universe, in this case, a universe where I have more time, and where I also have thicker skin.

I’ve always cared most about connection most of all. As a kid, I wanted to connect with everything — nature, other people, the Universe, the fictional characters I found between the pages of a book. As I got older, my desire for connection got deeper. I wanted to connect with my tribe, that posse of kindred spirits who’d make everything alright. I thought that if I could just find people who were “just like” me, I would feel less alone. It was a strange thought considering that the other thought that had taken up so much of my headspace over the years was that I always had to be my singular self — which, by definition, meant there were no others “just like me.”

There was a simple fallacy at the heart of the push-pull going on between the wayward inner voice spurring me on to find a tribe of Paula clones, and that other voice, the one that knew we were meant to be our unique and singular selves, but feared that path would leave me all along.

What I realized, literally over the Thanksgiving weekend, is that sameness is not the remedy for aloneness; building a community of affinity is. It’s something I might have learned from living in the actual world — that is, if my early experiences there hadn’t laid down neural pathways that made that hard to do. Instead I learned it from the virtual one.

One of the most brilliant insights I got from Amy Jo is that people don’t buy what you’re doing; they buy why you’re doing it.  It’s an insight she got from Simon Sinek’s TED Talk. (Ya’ll know how I love TED, so I’ll be sharing Simon’s TED Talk at some point later on). This chain of communion — from Simon to Amy Jo to me — is what new media now represents to me. It represents the opportunity us to find, not our tribe, but the many places and ways in which we are one with the entire community of man.

My deep belief is that there is only one of us. This idea goes part and parcel with another idea I ran across many years ago. It was the idea that “the entire universe is the living body of God.” Both ideas cause me to sit with reverence in the presence of all of humanity and all of creation. It’s what makes me want to connect. It’s as if the parts of me are scattered about the world, inside of everyone and everything that has ever existed and that ever will exist. When I think of all this past and future time, I think of the phrase “the eternal now”, a spiritual phrase I borrowed from some source long forgotten, and how it nods to Einstein’s scientific truth that time is but a dimension of space — and that, in some literal sense that lies beyond our third-dimensional understanding, all time is literally now. In this now, I want to connect. And in this now, I and we, every last one of us, are already connected. Social media allows us to experience this truth, Twitter most of all. It allows us to have real time conversations with people anywhere who care about the things that we care about. It allows us to help one another in real time, a point Amy Jo makes so poignantly when she tells the story, in Renegades Write The Rules, of how people used Twitter to help one another in the face of the Tsunami of 2011, which ravaged Japan before heading for Hawaii and the California Coast. And, yes, it helps us build our businesses and brands, but only if we’re being authentic, only if we’re offering our real selves to the world.

As I write these words, my heart is swelling with joy. My whole life is about connection. It’s why I’ve now taken the first small step toward building a brand that will eventually bring together the worlds of film, Internet, social media, print and product toward the end of inspiring people to live more realized lives, and helping to make a world in which everyone can do the same.

I travelled a hard and winding road to get to this place, but I’m here, right where I belong and exactly the right time. I think back now on how much I’ve always wanted to change the world. I even went to law school thinking I’d have a career in human rights, only to come back from an amazing, life-changing human rights internship in Kenya (a.k.a. My Kenyan Odyssey) knowing that I was meant for some other life.  That other life was a life deep into the world of story, a world I’d entered young, having learned to read at three. That place never felt quite right either. I wanted to tell stories. I loved film storytelling (which is the story world I’d chosen to call home). But I wanted story to be more than just entertainment. I wanted it to be the kind of entertainment that made people  feel, and I wanted to use story to help re-shape the world. I didn’t know how to do it until now.

What’s different about now is that now is a place where anything is possible. We can now tell stories across platforms, and we can now see, better than ever before, that everything we do is a story. A movie is a story, sure, but so is a product, a brand, a tweet, a Facebook experience, the policy decisions we make (and the ways and places we talk about them), a photo or group of photos, and on and on. Because story is everywhere, we now have the opportunity to use story to change our world. We’ve always done it. The Declaration of Independence told a story that forever changed the world, as did the stories Martin Luther King and Ghandi told. Now, with social media, the power of story is everywhere. And so is the greatest power the world has ever known — the power that comes when we just connect.

This year I’m going to step outside my protective, Cancer crab shell, and I’m going to connect. I hope to see you there.

Leave us a comment and tell us how you’re connecting through social media and out in the world. Let’s keep the chain of connection going. It’s literally changing our world.