I love unexpected collaborations, like the 2011 collaboration among the innovative fashion design and sibling duo Kate and Laura Mulleavy, the native California born geniuses behind Rodarte, the California photographer Catherine Opie, whose documentary-style work takes on social-political themes, like the theme of community, which shows itself in her portraits of the LGBT community, surf community and high school football player community, and Alec Soth, the midwest-born photographer known for his large-scale American projects, which feature the midwestern United States and are known for their cinematic feel, folkloric elements that hint at a story behind the image, and an interest when focusing on human subjecst on what the New York Times art critic Hilarie M. Sheets calls “loners and dreamers.” The Rodarte-Opie-Soth collaboration was a homage to a certain California landscape and a certain California way of entering into life. 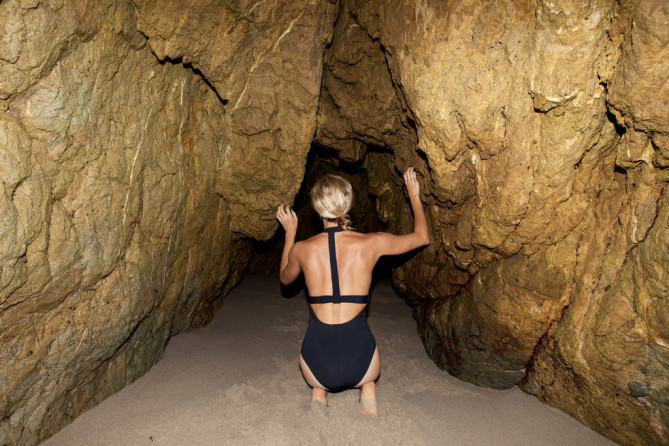 California figures in another collaboration that caught my eye when it was featured this week in T Magazine — between the swimsuit designer Rachel Comey and her old friend and former roommate, photographer Willy Somma. 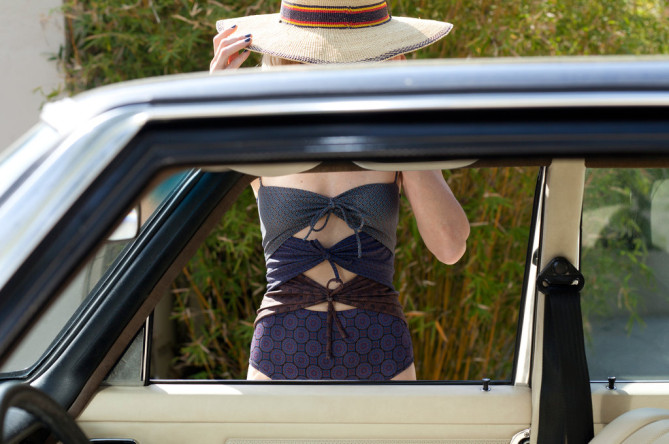 Again, the designer took the lead, this time asking her friend to shoot portraits of herself wearing Comey’s swimwear. Comey describes Somma, who does not see herself as a swimsuit model (so don’t let the photographic evidence fool you), as “a bit of a beach babe.” Somma did interesting work, “[d]rawing influence from the work of Guy Bourdin, Alfred Hitchcock and Michelangelo Antonioni,” T explains, in creating photos of herself “in various Los Angeles locations: the cliffs and caves of Malibu; in Santa Monica, where the boardwalks meet the highway; in front of picture-perfect hedges on residential sidewalks.” In each image, T explains, she obscures her face because, in Somma’s own words, “It’s not about me. I want it to be about forms and shapes that figure against a landscape.” 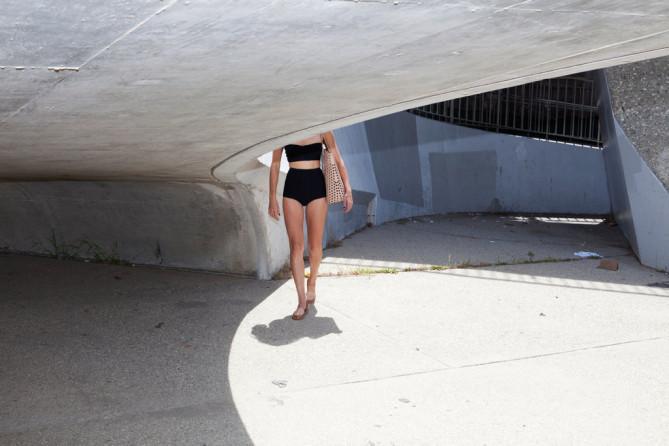 The Rodarte commissioned Rodarte-Opie-Soth had similar preoccupations. Rodarte provided landscape photographer Soth with a map of California marked with suggested routes and sites, and loose instructions about photographic content such as condors, forest fires and people sleeping. They assigned documentary photographer Opie the task of photographing their clothing on models. Their vision or “cartographic impulse,” as John Kelsey calls it in his text for  artbook.com, was to have one photographer following the landscape and the other following the clothing. This impulse to map “fashion design [onto] the production of spaces and worlds” is reflected in the design of the exhibit book itself, which pairs fashion image with landscape image in ways that suggest a shared parentage. Given the heavy influence California has had on the Mulleavey’s work, the juxtaposition of fashion and landscape isn’t a stretch at all. Comey and Somma are up to something similar, if a little less high-fallutin’. Comey’s swimwear and Somma’s photographic eye transport us to a specific place: to the glaring natural light and rugged natural and manmade landscapes that only exist in this way in L.A.