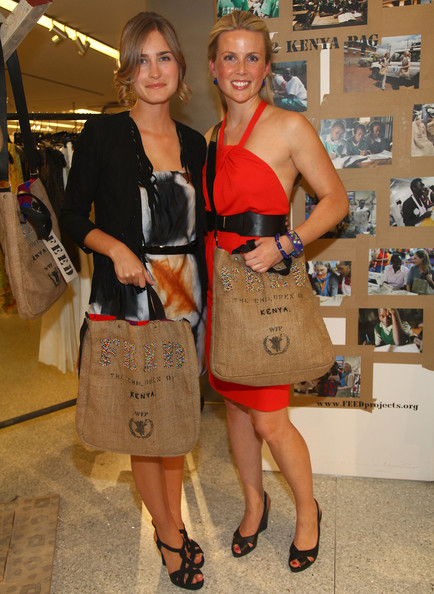 When Lauren Bush Lauren and Ellen Gustafson founded FEED Projects five years ago, all they had was passion and a great idea — okay, and a surfeit of brains, vision, youth, good looks, and a famous family name.

In 2004, Lauren became an honorary spokesperson for the United Nations World Food Program (WFP) where she met Ellen, then a communications officer at WFP. They had a simple, yet visionary idea: to sell a reusable market tote, with the proceeds of each bag providing school meals for a year for a child in the developing world. The FEED 1 bag was born, to be followed by the FEED 5 bag (which feeds 5 children), the FEED 10 bag, and son on.

Bush Lauren and Gustafson launched FEED Projects in 2007. In the 5 years since, they’ve provided 68,725,046 school meals and counting, while building a successful, for-profit business that has captured the socially-ecologically-style conscious  zeitgeist. Today, FEED Projects works with WFP, UNICEF, Millennial Villages, and other organizations to fund anti-hunger programs worldwide. They developed a FEED Haiti bag in the wake of the 2010 earthquake, launched a FEED USA bag to combat hunger in the United States and entered into creative collaborations with brands like Tory Burch, TOMS (with whom they made a shoe), Clarins, and Godiva.

I’m a fan of the FEED 2 Kenya Bag, a hand-beaded bag lined in red and royal blue Maasai plaid that provides school meals for two children for an entire year, while also providing economic opportunity for the co-op of Kenyan women and Kenyan deaf who handcraft the bags. It’s not the cheapest burlap bag you’ll find, but it’s gorgeous, and it does a lot of good.

In many cases, the school meals that FEED Projects and their charitable partners provide are the only meals that a child will receive all day. Many children take a portion of the meals they receive home, to share with younger siblings to young to go to school.

School meals make it more likely that a poor child will attend school, and have the energy and nutrition his brain needs to learn. For girls, school attendance changes their lives and the lives of generations to come. Girls who attend school have fewer children, they start having them at an older age, and they’re better able to provide for them once they are here.

Five years ago, Bush Lauren and Gustafson had an idea that would change the hunger landscape. They used business to extend the work of organizations like WFP and Unicef, and to engage everyday consumers in the work of feeding the world. They did it by starting where they were, and by leveraging who they are. They took their passions — for hunger issues in Ellen’s case, fashion and hunger in Lauren’s — and made them mean something.

WHAT THEY DID NEXT:

After co-founding FEED Projects, Bush Lauren went on to found Lauren Pierce, an eco-fashion label dedicated to the empowerment of women through trade. In 2011, she married David Lauren, son of the American fashion designer Ralph Lauren. She now serves as CEO and Creative Director for FEED Projects, and Chairman for the Board for the FEED Foundation.

In 2011, Gustafson founded 30 Project, a think-and-do-tank for changing the world food system that’s tackling the twin problems of hunger and obesity. 30 Project is developing long-term solutions for systemic change achievable over the next 30 years with initiatives that include HealthClass2.0, a New York City in-school healthy living program. Gustafson is 30 Project’s Executive Director, a position that parallels her post as the former Executive Director of FEED Project’s non-profit partner, FEED Foundations. She remains a member of FEED Projects’ Advisory Board. She married Lt. j.g. Michael Campbell in 2012.