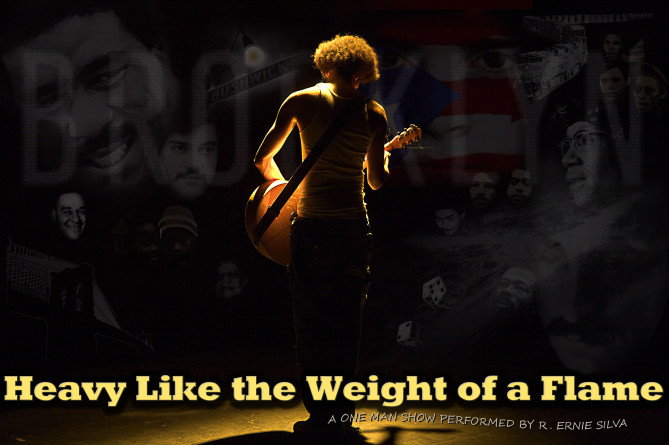 Even in Bushwick, Silva found people “like me,” who liked certain kinds of music, for example, though they kept it on the down-low. Project-dwelling lovers of The Pixies, Def Leppard, Guns & Roses — or the one guy, Jeff, who was a fanatic for Front 242. Still, Silva was the only one of his friends whom everyone knew would leave home.

Silva began performing standup in New York City at the ripe age of 16, playing his first set at the Comic Strip on the Upper West Side and following up at the Comedy Cellar and other Greenwich Village clubs. By 20, Silva hit the road to live the “dharma bum life” — hopping the occasional, “hard-on-the-body” Greyhound bus, but mostly living the caravan life, where having been recognized by another “member” of his loose-knit vagabond-bohemian-wayfaring tribe, he would hitch a ride to his next port of call or to the next Rainbow Family gathering where he could get his hippie on. Silva spent the next seven years on the road, picking up a bachelor’s degree in theatre along the way, from the Southern Illinois University at Edwardsville, where he enrolled intending to be a writer “like [Jack] Kerouac.” A few years later, as a student in the University of Southern California (USC)’s master’s in Theatre program, he became one. After being introduced to solo performance through the New York Hip Hop Theatre Festival, in which Silva performed in a play, he decided that he would leave USC with his masters…and a Broadway-ready one-man show. He collaborated with a writer whom he credits with getting the ball rolling (pulling stories out of him, writing some important early pages and helping him realize that he knew intuitively how to write for the stage) before writing the piece that would become his award-winning Heavy Like The Weight Of A Flame.

When Silva and I sit down to talk about Heavy he tells me that his family “is full of some crazy people” and “God love ‘em all, and I love ‘em…, but they’re nuts.” Heavy, the first of a trilogy, centers on his domineering mother and two older brothers (Silva is the youngest of 13) with whom he didn’t entirely gel. It’s Silva’s coming of age story as a half-black, half-Puerto Rican kid growing up in New York City in the golden age of hip hop and police brutality who found refuge in his books and acoustic guitar, which becomes another character in his show. He describes it as “Brooklyn kid meets Jack Kerouac On The Road,” and references John Leguizamo and Richard Pryor who, like him, built careers in which their “life is what they talk about.”

Like and Pryor, Silva tells a particular story; yet it is also a universal one. One that’s found its audience among a wide cross-section of humanity — from a fourteen year old boy in Atlanta who identifies as a “breaker” to a woman in Scotland in her 60’s.

The key to Heavy’s universal appeal lies in a simple dictate Silva writes by:“I’m gonna tell the truth, like the straight truth, but I’m gonna frame it in a fashion that it could be about anyone [and] boom, you grab the whole audience.” When I asked him how he did that, how he framed his particular story so that it could speak to someone as different from him as a 60 year old Scottish woman, he talked first about the archetypes he used — brothers, a mom and, in his case, overbearing ones. “Even if you’re a single child, you still can relate to having an overbearing someone in your life, in some regards.”

Silva also attributes the universal element in his writing to the fact that his character “never points the finger of blame at anyone, …never says ‘it’s this person’s fault this happened’ or ‘it’s because of that.” Instead, he alludes to things that happened and lets the audience make their own judgment. This ability to not opine, to simply tell the story, without passing judgment on the characters and what they do, that sets fiction above all the other moral arts (a point I made in response to what I felt were specious criticisms of Zero Dark Thirty a few months back). Fiction — in film, literature or on the stage — holds a mirror up, says “this happened, this is so,” and, in so doing, allows us to discover deep and universal things about ourselves and about humanity entire. Silva also offers this: “At the end of the story, if you can attach the fact that what you are now is positive because of it,” he suggests, you provide another gateway through which the audience might come to see themselves in the story you have rendered on stage. It is this desire, after all, to eek some goodness from the things we have suffered that is the most universal of all.

I wanted to tell Silva’s story because he’s at a critical juncture — raising capital to bring Heavy Like The Weight Of A Flame to the Off-Broadway stageand, from there, one suspects, on to Broadway — but also because his story is mine. Not in any literal sense, but in all the deeper ways that count.

Silva grew up a hippie in a housing project in Bushwick New York. He was from another country even then. Like me, he had to leave home to find his tribe. In the end, it’s a tribe of affinity, one that transcends all the borders and boundaries that divide us. Thinking of my own search for “tribe,” I put it to Silva like this:

“Some people do fit neatly into a tribe — or a tribe encompasses much of who they are — but…there are all these people walking around the planet who are…things that are universal, [who] are connected to people not based upon identity, …not because they’re your same race or…age…or your same style of person, but because, on a soul level, your level is your story. So the details are different. You’re from Bushwick; I’m from a fancy neighborhood in Tallahassee, Florida, but there is so much…you’re speaking to that is my story too. And it’s not about what package we’re in, or what town we’re from, whether we’re poor or middle class or rich, …it’s something deeper than that, and that’s…the level of work that’s needed right now, the work that speaks to what we all suffer.”

To which Silva responded, “From your mouth to God’s ears, because I think that’s going to be the saving grace for all humanity.”

As if to bring it full circle back to where we began Silva reflected again on the people who’ve come to see his play. He said he’d never had anyone come up to him afterwards and say, ‘I really can’t relate.” Even in the projects of Bushwick, Silva found people like him. Now he’s finding them out in the larger world.

To support Heavy Like The Weight Of A Flame, you can visit their campaign here. Donations may be made until 11:59 on June 18th.