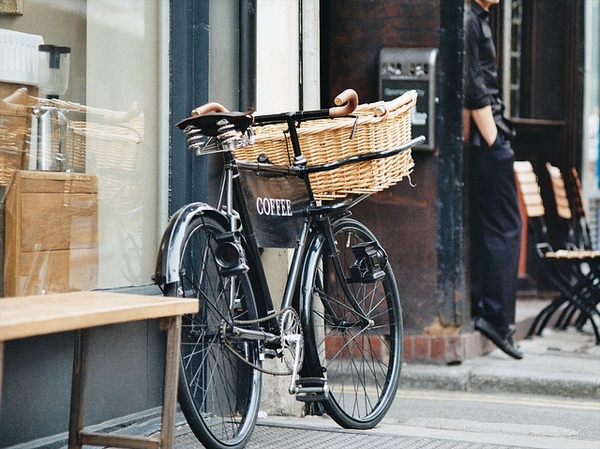 I love the idea of riding a bike in the city, even though it seems all wrong in the city where I live, where I’m pretty sure the risks of being run down are pretty high. Still, I dream of some future, more gentile time of bike lanes and patient, courteous drivers who are primed to share the road.

In Europe, getting about on a bike feels like the sane and civilized thing to do. A few years back in Barcelona, the hubby and I commandeered some rental bikes and saw the city in a whole new way. Of course, it did get dicey as we made our way into Gotti park in the Barcelona hills, but the ride down, and the opportunity it gave us to discover hidden pockets of the city, paid us back with dividends. We wore helmets. We were the only ones. If I’d had my way, we would have done as the natives do, but my husband preferred the path of caution, and I was happy to follow his lead. We are differently risk averse, he and I, but we balance each other out, with me goading him into breaking the occasional rule, and him making sure I don’t break my neck.

Being an American, which is synonymous with being well indoctrinated into the waxing culture of fear, I was happy to concede the helmet point (I put on the helmet. I let it muss my hair). So I was curious to learn, a few months back, that my impulse to put fashion before safety may have not been as cockamamie as it seemed. I was in my car, listening to NPR, as I often do to while away my Southern California traffic time, when what should I hear but a considered conversation about the inverse relationship between helmet use and bicycle use. As a public policy matter, it turns out that requiring people to wear bike helmets sends the message that bicycling isn’t safe — and makes people reluctant to hop on. A comparison of two European cities stands out in my mind, one cold and cobble-stoney and full of bike riders, and the other a warm, flat, perfect bicycling city where almost no one rides bikes. Both cities had city bicycle programs that made it easy to grab a bike (easier than checking out a library book) and return it when you’re done at your final destination. The balmy city had bike helmet laws; the cobble-stoned one did not.

The parable of the bike helmet…

In an effort to protect ourselves from remote risk, we create realities that makes us the prisoners of fear. Lacking a helmet, we do not take the glorious ride. We give up the notion, before it’s hatched, that we can move through this world under our own power. Defeated before we begin, we park our bikes in the garage and slide into a car not of our making, forgetting that cars are dangerous, too, maybe even more so than our bikes. It goes without saying, of course, that moving through life under our own power does not mean we travel alone. We need people and systems to buoy us on. Still, as I’ve learned from my years in Hollywood, effort must be taken lest the system eat your soul.

Like so many people, I have lived my life with an ear listening out for the confirming voice of the other. In the end, of course, we must attune our ear to our own voice. Hearing your own voice is a prerequisite to being able to hear the voice of others both accurately and well. What we are listening for, once we have learned how to hear, is when the voices of the other is there to help to guide us home and when it is leading us into the briar patch. Living and working in Hollywood, a place where getting there — to fame, success– often means letting other voices drown you out, in can be difficult to hear your own voice, or even remember you have one. And yet, it’s the people who proceed under their own power who end up with the careers I most admire. I think here of people like Alan Ball who wrote the off-beat American Beauty (produced by Bruce Cohen and Dan Jinks, who’s one of my favorite people in Hollywood, both for his kindness and his exquisite taste), which went on to win five Academy Awards. Ball went on to create Six Feet Under and True Blood, both distinctly of Alan Ball’s world. I think also of the writer/director Paul Thomas Anderson, who’s never made a movie that didn’t have his DNA; or the writer turned writer/director Charlie Kaufman, the wicked original mind behind the great films Being John Malkovich and Adaptation, which both bear his indelible stamp, a feat all the more remarkable in the case of Adaptation, which is technically (though perhaps imperceptibly) an adaptation of someone else’s work (Susan Orlean’s The Orchid Thief) and which, in a medium widely agreed to be in the director’s purview, was directed by someone else; r the Tony Gilroy who gave us Michael Clayton, the finest screenplay of his career, as well as his directorial debut. Gilroy’s later directorial work bears the stamp of Hollywood more than it bears his own, but having walked in a less exalted version of his shoes, I know how this occurs — and how very difficult it is to pave a different road. Still, pave our own, original, one-of-a-kind way we must — if not through Hollywood (though, yes, there also), then through a larger world.

To arrive someplace glorious, to arrive at our own fully realized lives, we must travel under our own power, the way we do when we’re peddling a bike. We must travel without a helmet if it comes to that, reminding ourselves that this thing we’re doing is essentially safe. That doesn’t mean we won’t run into trouble. Accidents occur, people get injured, sometimes (or, rather always) we die. But if we can set fear aside, believing that we are safe in the end (and in the end we are), we stand a chance of entering the magical kingdom of the self.

As often as not, we enter the magical kingdom of the self through doors we cannot pry open on our own, doors that, like in The Lion, Witch and The Wardrobe, we may not even know are there. And yet, we must still set our course and set off in the direction of our dreams, helmet-less, on our single speed bike.

I first set off on my bike quite a while ago, while still a student at law school in New York. I rode off into an unfamiliar land. Let’s call it Hollywood (since, seriously, that’s what it was called). About seven years in I got lost. It took me a few more years to figure this out, and a little longer for me to let my resistance to this reality go. It’s a journey I wrote about recently in The Virtues Of Getting Lost. That was 20 days ago. Then, writing from the dark forest where Holy Grails are found, I talked about my decision to walk away from Hollywood and my discover that perhaps Hollywood wasn’t done with me yet. Characters had started to speak to me again. Two sets in fact, from two different screenplays, both of which I’d conceived before I walked away. I didn’t know what this would mean and truthfully I still don’t. But I do know that I will. Already, I know that one of those stories is a novel. Though it would make a good film, it’s not the kind of film that’s easily made (and I’m not the kind of person to keep pounding my head against a wall — at least not any more than I already have). Then, just Friday, I read through the 89 pages I’d written of the other idea I’d abandoned, a romance-action-thriller with the commercial potential of Bourne, though it sits someplace deeper in my soul, someplace that begs to be breathed into life through prose.

And so, I find myself preparing myself to write not one, but two novels, though undoubtedly one at a time. I can see now that a novel has always been coming, that it was always part of my narrative, whatever role film and TV may still play. The journey that brought me here, humbled before the page, has been a circuitous one, one that took me to law school  and New York City and Kenya (a place that changed my life) and to the New York and L.A. offices of a prestigious law firm that cured me, once and for all, of any impulse to practice law and, yes, into the world of film, a world I came by honestly, having invited, and listened to, a voice that could only have been from the gods, telling me clearly, “you will write for film”. And so I did. The world of film has sometimes been good to me and sometimes not, but I know that this too is part of my narrative. Through the doorway of film, which I came by honestly, I have arrived here. And here — and in all the heres that are yet to come, in all the worlds I have yet to occupy — is where I belong.

PHOTOGRAPHY (top to bottom) BY SCOTT SCHUMAN, A.K.A. THE SARTORIALIST via The Art Of The Trench, via Pink Wallpaper, via the former I Wanna Be Gwyneth tumblr.