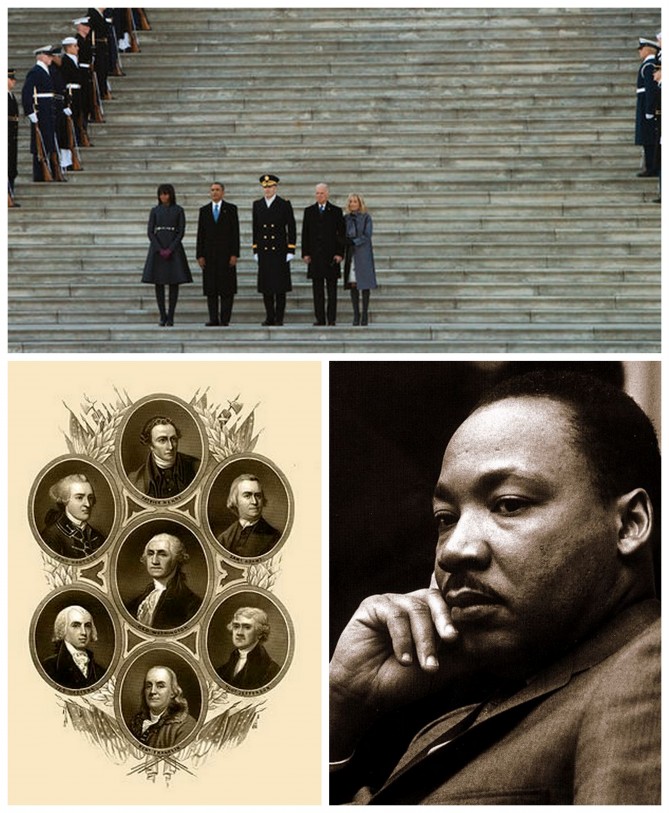 Today we celebrate Martin Luther King Day, and mark the second Inauguration of President Barack Hussein Obama.  I was moved to tears writing this sentence, just as I have been moved to tears again and again throughout this day, which more than any in recent memory captures the long and beautiful arc of history.

There is so much to reflect upon today, but for now I leave you with these quotes, which so beautifully capture the power, message and meaning of this day:

“We hold these truths to be self-evident, that all men are created equal, that they are endowed by their Creator with certain unalienable Rights, that among these are Life, Liberty and the pursuit of Happiness.”

“We’re one people, we’re one family, we’re one house. We all live in the American house”

“Well, I don’t know what will happen now. We’ve got some difficult days ahead. But it doesn’t matter with me now. Because I’ve been to the mountaintop. And I don’t mind. Like any man, I would like to live a long life. Longevity has its place. But I’m not concerned about that now. I just want to do God’s will. And He’s allowed me to go up to the mountain. And I’ve looked over. And I’ve seen the promised land. I may not get there with you. But I want you to know tonight, that we as a people will get to the promised land. And I’m happy tonight. I’m not worried about anything. I’m not fearing any man. Mine eyes have seen the glory of the coming of the Lord.”

“We, the people, declare today that the most evident of truths – that all of us are created equal – is the star that guides us still; just as it guided our forebears through Seneca Falls, and Selma, and Stonewall; just as it guided all those men and women, sung and unsung, who left footprints along this great Mall, to hear a preacher say that we cannot walk alone; to hear a King proclaim that our individual freedom is inextricably bound to the freedom of every soul on Earth.”

PHOTOGRAPHY AND IMAGES (top) BY DOUG MILLS for the New York Times, (others) Unknown