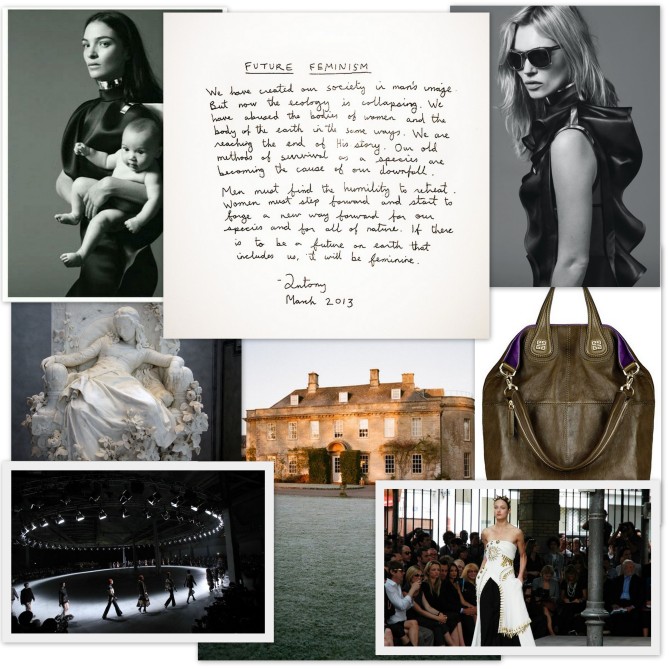 I alighted upon feminism in college, where I spent hours over bagels on Sunday mornings at my friend Stacey’s off-campus house founding our campus’ now 20-year old Women’s Center. From the start, we were interested in gender and race and class and sexuality. Even back then, when I was a young woman with barely a toe in the world, I understood that feminism wasn’t just about women; it was about the world we inherited, and the world we would leave behind. When I read Monica Sjoo’s book The Great Cosmic Mother: Rediscovering The Religion Of The World I began to get some meat  around those ideas. Antony’s Future Feminism manifesto is Sjoo light. It’s her complex and heavily researched ideas boiled down for the busy masses. As much as I love a great philosophical treatise, what I love even more is seeing grand ideas trot down from the ivory tower (or burst out of this or that ghetto as the case may be), and infuse themselves into the actual world where the lot of us live.

Most of us aren’t feminist or deep ecology types. I’m a bit of both, in philosophy if not always in deed, but these ideas are starting to seem stale even to me, existing as they do on the outskirts or margins of our lives. I’m not interested in the margin of things. I’m interested in the center where our reality is made. It’s why, in coming up with Revel In It idea, one of my goals was to bring all the meaningful things out in from the cold. “Meaning’s the new normal,” that’s my new creed, and my mission, to bring the beautiful into our everyday lives. I want to see a fashion house spin radically feminist, deeply ecological ideas into the everyday business of selling clothes. Or to put it differently (and more shallowly), I don’t want to have to ignore fashion just because I care deeply about ideas. I want this world to be beautiful and meaningful. I want it to be all the things that it can only be on this material plane, and I want it to be redolent with the beauty and weight of our souls. It’s why I abandoned the career I thought I would have in the law and in human rights in order to wade into the waters of the culture industry, where every day people offer up a vision that, subtly and often without announcing itself, helps to shift our world. It happens every time a movie actually means something, every time fashion is made sustainably, every time a business is launched that serves some higher end than profit alone. And in this way, one idea and execution at a time, we who care about creating most of all, will do our small part to shift the axis of the world.

And so, Givenchy. I love Givenchy because it’s glamorous, and edgy, and just twisted enough to be saying something that I always suspected was a little bit subversive. This time they chose to say — or let Antony say — the most unlikely thing: that the way we treat actual women, and the way we treat the feminine idea — in culture, religion, history and so on — gives shape to our actual world. The world it’s given shape to isn’t serving most of us, not even those of us who appear to have it all. We’ve worshipped the Sun Gods so completely that we’ve forgotten we must worship the Moon Goddess too. She alone knows the cyclical, interconnected nature of things. It is she who teaches that the brother is also the self, and that what we do unto the least of us we do also unto ourselves. She is speaking to us now, in a thousand whispered voices — and in a message scribbled on a piece of card stock left in the seats of a Paris fashion show

PHOTOGRAPHY (Antony Manifesto) via Into The Gloss and (all others) unknown