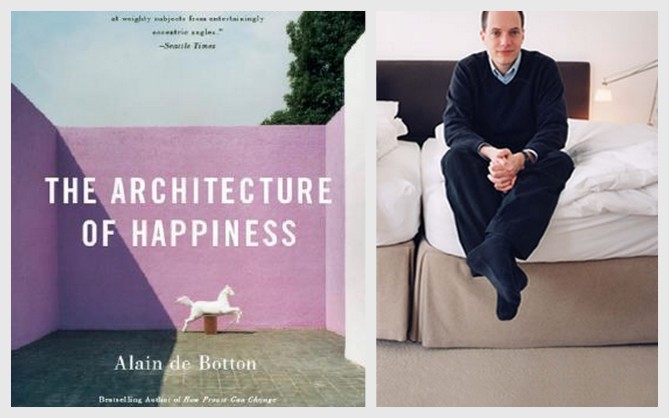 Yesterday I happened upon a book from the writer/philosopher Alain de Botton, The Architecture Of Happiness it is called. It begin so lyrically that I will start my ruminations here, with de Botton’s first words:

“A terraced house on a tree-lined street. Earlier today, the house rang with the sound of children’s cries and adult voices, but since the last occupant took off (with her satchel) a few hours ago, it has been left to sample the morning by itself. The sun has risen over the gables of the buildings opposite and now washes through the ground-floor windows, painting the interior with a buttery yellow and warming the grainy-red brick facade. Within shafts of sunlight, platelets of dust move as if in obedience to the rhythms of a silent waltz. From the hallway, the low murmur of accelerating traffic can be detected a few blocks away. Occasionally, the letter-box opens with a rasp to admit a plaintive leaflet.

“The house gives signs of enjoying the emptiness. It is rearranging itself after the night, clearing its pipes and crackling its joints. This dignified and seasoned creature, with its coppery veins and wooden feet nestled in a bed of clay, has endured much… [It] has grown into a knowledgeable witness.”

de Botton’s words, so beautiful I could weep, aroused deep emotion in me, and set loose thoughts — free-radicals for my mind and soul — about architecture in the broadest sense, as the act of giving shape and structure, not to a building, but to a life.

I am deeply interested in this notion that the way we construct our lives matters, that the work of building fully realized lives takes place not only in the inner terrain of our emotional-psychological-spiritual landscape, but also “out there,” in the world, where we have the rarest of opportunities, by virtues of having obtained a human birth — which Buddhism tells us is difficult to attain. Mind you, this is not to suggest that there is anything particularly precious about human life. In the hierarchy of Buddhist cosmology it is low on the totem pole, but all states of consciousness in the universe are available to a human life, from suffering to the liberation therefrom, which we know by many names: enlightenment, satori, samādhi, Heaven on Earth.

My friend the Nigerian novelist Chris Abani tells me that, in the Yoruba religion, we human beings are known as “the thinking ones,” and Buddhism’s regard for a human birth is rooted here, in the awareness that we, who know suffering as well as the possibility of transcending suffering, have an immediate reason to seek out the ever-present transcendent possibility and, by virtue of being the thinking ones, we have the means to attain it. de Botton reminds us, though, that the transcendent is to be found, right here, in the material world of form where we are living out these very human births.

I’ve lived in Los Angeles since the late 90’s, a place where opportunities to escape into the “transcendent” are around every corner. I’ve been to energy healers, Buddhist retreats, a Native American sweat lodge on a mountaintop, temples of every ilk, a ceremony by the sea honoring the Afro-Brazilian goddess Yemaya, drumming circles and hallucinogenic rites. I’ve declined invitations to Landmark Forum and Al-anon and the cult-y Church of Christ. I’ve fought off legions of Christian prothelytizers who’ve tried to woo me or threaten me into the arms of Jesus, a Boddhissatva or enlightened being who, thank you, I already know quite well. I’ve spent Monday evenings with Marianne Williamson and many an afternoon snuggled up with a spiritual or new-age book. I have heard the unsolicited predictions of psychics (which I largely ignored), and weighed the wisdom of forking over money for my Vedic chart. But in the end, what I returned to is what I’ve known all along, since I was a little child playing in the woods of Northern Florida: we are in these bodies in this world, and the world — the physical landscape where we live out our human lives — matters. We are here. There is nowhere to retreat to, not until the moment of death, that is, and so I am quite certain, the way we live matters, not just to ourselves, but to other people and the world.

If our lives are to be a positive offering, then we must remember, most of all, that being alive is a sensual, tactile experience. We must get back into our bodies and back into communion with what it tastes, smells, sounds, looks and feels like to be alive. That we live is not enough. We must make our lives a monument to the beauty that resides within our own soul and within the heart of the world. This isn’t high fallutin’ work. It’s the work of the hands, and it resides between the lines of the every day.

The house de Botton speaks of is a house drenched in everyday-ness. It is present. It is a reminder that we must find moments like these also, to sit in the shafts of sunlight, to listen, to be still, to attend to the things around us and the way we actually want to live, for the trick of modern excessive living is that we so often don’t even know. We fill our spaces and our lives with so much “stuff” that we haven’t the space or the inclination to think about which of these things enhance our lives, which of them bring us joy. Addicted to the noisy clamor, we don’t notice the difference between addiction and choice.

When I speak of the way we live, I mean different things. I mean the integrity with which we live — the choice we make, for example, to delve deep into the heart of sustainability to things that might inconvenience us and alter the architecture of the way we live; or the choice to recognize that our great fortune comes, as the world is presently constructed, at the expense of someone else (though we can change this, with attention and time, as indeed we must. I mean also the fullness with which we live. And full living is about “stuff,” though not the thoughtless, excessive stuff that litters so many of our lives.

The obsession with largeness and more-ness seems peculiarly American though, like a communicable disease, it is spreading far and fast. We Americans have a peculiar faith that bigger is better, despite striking evidence that bigness is nothing much at all. Often as not, bigness denotes a paucity — of spirit, of meaning, of life. We use stuff, then, as a stand-in for the deeper things we’ve lost. And when we aren’t doing that, we are making the opposite mistake, pretending stuff doesn’t matter at all. It does, of course. We are embodied beings. And decorating our homes, adorning our bodies, planting our gardens, entering the forest, or a building, these things matter. They are an essential part of the architecture of happiness, and architecting our happiness is the essential work of our lives.

As the Buddhist monk Thich Nhat Hahn teaches, we must transform our own suffering, and find the happiness available in every moment of our lives, before we can sow the seeds of happiness in other people and in our world.