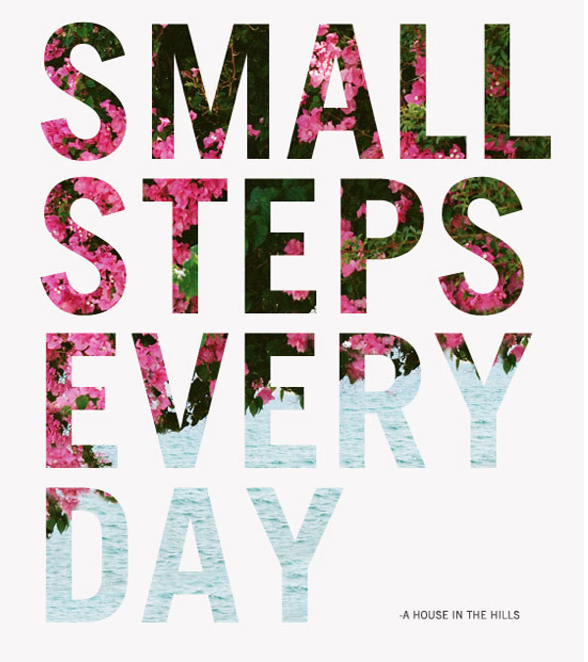 If you want to accomplish anything — from learning how to building a mind-bendingly fabulous life and career — you’ll need to take small steps everyday in the general direction of your goal. Some of those steps may be so small that the over-achieving perfectionist in you may think you’ve done nothing at all. But, trust me, small steps are enough, small steps are “the way”.

We may dream of the big bombastic moments when our lives are writ large and everyone is craning their necks to catch a glimpse of this glorious creature who has pulled it off, “it” being the seemingly magical feet of attaining mighty goals that seem beyond the reach of mortal man. We worship these “gods” who ascend to the stratosphere — these movie stars or the movie-star-like, whether rapper, actor, or presidents — and just as rapaciously we watch them fall. How else to explain the popular penchant for reading Us Weekly and People, which my friend M explained to me recently is popular for a reason — namely, because no one wants to read stories about people who’ve had easy button lives. Ironically, these are the stories I most like to read and write, if for no other reason than what I can learn:

Easy button people have father’s who finance their business ventures, or they land the job — it practically falls in their lap, in fact — that sets in motion their dream life and career, or they meet the love of their life before they get old and weary from trying and start a family and build mutually rewarding careers, all without breaking a fingernail. To that I say, bring it on.

So enthralled was I with these people of the seemingly easy life that I ignored all the friends who warned me against the perils of comparing. I tried to explain (it fell on deaf ears): I wasn’t comparing. I was taking copious notes.

Here’s what I noticed. Easy button people did two things differently than I’d been doing. One, they assumed the world was a nurturing, hospitable place, and two, they took small steps every day with the sure confidence that those steps would add up. They did not, as I had done, try to scale everest in a day, they didn’t assume that their fate rested in their ability to produce the “perfect” screenplay, today or any day. They did not watch the pot boil. They just did things every day and let the rest of it fall into place as if they’d exerted no effort at all. This way of working has a lot in common with being in the flow. You do the thing that is before you, you absorb yourself in it completely, you keep it real, authentic and true, and you trust that whatever needs to come of it will. A door will crack open that leads you down the road to other opportunities, or you’ll end up an “overnight” thanks to the windfalls of good fortune, which can take a band like The Lumineers from Brooklyn also-ran to band among bands in distraction-free Denver,  which turned out to have been nurturing a music scene all along, to the stage of the 2013 Grammy Awards, where the nominees for Best New Artist and Best Americana Album performed their stirring, upbeat “Ho Hey!”

When sudden success comes, it usually doesn’t come “out of nowhere.” Rather, it comes on the heels of someone having taking many small steps. This is not to suggest that our steps lead directly to our goal like a crumb trail. Often as not, our steps seem to produce nothing — we don’t get the job, we don’t meet the woman or man — but the sheer act of putting one foot in front of the other, taking action in hopes of achieving a particular aim, puts us in that “rich get richer” space, where magic can enter seemingly unbidden. The rich get richer because they believe the world is a nurturing, hospitable place and so they act, and they do so with confidence, knowing that in time, they will arrive in that place where they were headed all along, either the place they envisioned or someplace that suits them better still. All that arriving starts with a single step and the steps that follow.

How has taking small steps influenced the direction of your life?